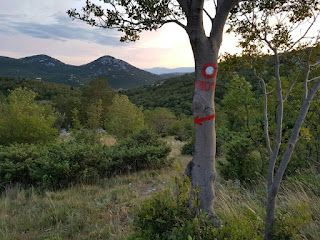 Just after we'd gone to bed even more Croatian Policijas turned up and started poking round the truck. Once again, the officers were extraordinarily polite and apologised for not knowing of our earlier similar encounter. Long story short, it seems we'd inadvertently set up camp on an illegal-immigrant super-highway: so had sown and now were reaping. The officers made us feel very welcome in Croatia, though; which was nice.

Today's drive was intentionally well off any obvious tourist trail in an effort to try to gauge Croatia a bit better. Bottom line: we had a great day. For hour after hour the country rewarded us with lovely landscapes mainly consisting of wide-open spaces consisting of rolling hills and untrammelled scrub and woodland. Traffic was also far lighter than our first encounter, and drivers far less aggressive.

Towns and villages, too, were far more authentic. Altogether, our impressions improved dramatically. It's admittedly a dubious generalisation but it seems that the further you get from the tourism honeypots here, the better. It's definitely more chalk and cheese than most other countries we've been to.

At the coordinates shown now where we're going to kip. It's an unlikely spot consisting of an old track that may once have been the main road but for all its simplicity it's completely out of view of anyone and delivers excellent vistas.

Insects are reptiles are abundant and the spot has already given up many lizards, a snake of about a metre in length (couldn't identify it) and two new-to-me butterflies in the form of rock grayling and large wall brown.

The only real downside is that there are many, many landmine warnings (pic) around and about, so we're absolutely confined to the track and its immediate margins.

Emma is perplexingly beguiled by such things; and, whilst we're spilling the beans, zombies. Now, ordinarily, when wives mooch off saying "I'm just going to look for a few shells" they come back with a collection of the aesthetically pleasing carapaces of long-deceased molluscs: Emma, though, comes back with the jackets of spent bullets... and worse. By this stage of the trip we have a reasonable collection of Balkans-conflict memorabilia and I confess, when designing and building the truck, bespoke storage for munitions and ordnance didn't occur to me. My bad.

Whilst idly watching for wildlife and half looking at maps (and cocking an ear for explosions), I started to form a quarter of a plan to maybe try to have a look at Venice. I confess it's the kind of cynical-parody-of-itself place that instinctively repulses me; but Emma's always been keen to have a look...