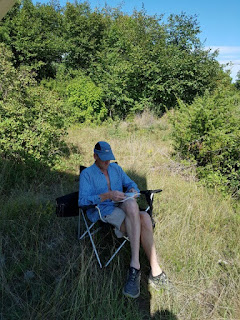 First up today was another swim in the Adriatic at Rijeka. The sea wasn't as clear here as further down the coast but it was still a marked improvement on Cleethorpes. There were, though, plenty of colourful fish and some pretty big ones, too. I didn't feel as good when trying to up the pace a bit today, it's worrying how quickly swim-fitness disappears.

As a matter of general interest, there were loads of nationalities at the bit of 'beach' we stopped at. We parked next to cars from Spain and Ukraine, and as well as scanning quite nicely, that pretty much summed the place up.

Leaving the beach we suffered satnav woes. As is sometimes the way, we were arbitrarily cajoled into a pretty narrow street, which quickly became a very narrow street, which then became an improbably narrow street... with a 33% descent including an accute bend of about 70°. I just, and I mean just, was able to make the horribly steep bend with a couple of shuffles back and forth, and - joy of joys - we promptly found ourselves in a dead end. This was bad.

Like often happens in these situations, a man appeared, asked me if I spoke English, and upon learning that I did asked: "How did you get that here and where are you going?" I didn't want to complicate things so replied: "Down that hill and Slovenia". His response was that I was very, very lost. I didn't imagine he was perceptive enough to know of my atheism, nor minded to try to make a vain attempt to save my wretched soul, so felt comfortable enough to simply agree.

With the predicament correctly inferred on all sides, he did a very kind thing and offered to grab his scooter and try to lead us out of the mess we'd caused, reassuringly saying: "This won't be easy".

It wasn't, but thanks to spousal cooperation (ordinarily, the mildest default setting is bickering), the genuine kindness of our knight on shining scooter and not a little good fortune, we made it out with full no claims discount intact.

Admission time. Our dedicated satnav is crude and old with out of date maps and we've largely navigated the non-EU Balkan states using my Nexus 4 and the shouty-sounding MAPS.ME app. In all seriousness, it all mostly works. The app is very good and on the occasions we have gone wrong, the error has usually been mine; so, naturally, Emma's. In fairness, she's been urging me for about ten years to get one of those new-fangled satnavs that come with things like lane guidance, live traffic news and mapping-software updates features, but I like to let technology settle down a bit before I commit. If proof were needed, I refuse to run anything but Windows XP on my PCs; though with a begrudging nod towards the future, I have installed the Service Pack 3 iteration.

Anyhow, we now find ourselves back in the jewel-like Slovenia. We've returned to an area we've explored before (coordinates) as all we wanted to do was rest a while before tryimg for Venice tomorrow and then the Treviso parkrun on Saturday.

Emma had a leisurely spin on the bike whilst I idly watched wildlife; butterflies, mainly. New-to-the-trip species were: common blue, small heath, false grayling, great banded grayling, northern wall brown and a bagworm. The bagworm is a day-flying moth and was new to me. Emma had actually spotted a bagworm larvae two days ago in Croatia but - at that time - we didn't know what it was. The larvae are weird and distinctive things, worthy of internetting if you're that way out (enjoy, Brian). Seeing and subsequently identifying the adult (pic) made all fall into place.

Evening time brought a possible goshawk sighting and a definite nightjar. It also brought that strange repetitive whoop call that we heard the last night we spent in Slovenia on our way south. Identifying it is driving me nuts.