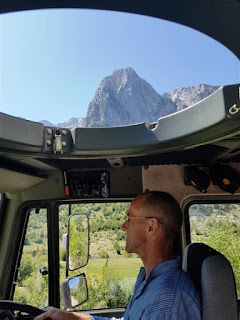 First up today was the Treviso parkrun. It's held in a lovely woodland setting, the organisers were very welcoming, and they seemed genuinely pleased that we were there. It was quite a small affair with about 50 runners, 10 or so of whom were from the UK. At least this time the organisers were fully native and doing a grand job of promoting the parkrun concept.

It was unsurprisingly tough given our cumulative mental and physical fatigue, poor diet, lack of training and the rainforest-like humidity. We were both really glad to have done it, though.

Amazingly, shortly after we'd finished, we discovered via Strava that one of Emma's colleagues; an all-round decent chap and a regular runner back in the UK, was holidaying on the Lido di Jesolo... the very place we were yesterday when making our assault on Venice. We had absolutely no clue he was in Italy and even less idea he was closer to us yesterday than he ordinarily is when we're back home. Only once has a chance encounter on foreign soil that was even more improbable occurred to me personally (involving my then-boss and an 'unexpected' partner), but that's a tale for another day. You couldn't make it up. Well, you could: but I haven't.

Italy generally has continued to impress. The architecture, civic pride, and well-presented properties, villages and towns have continued today; and we've also been treated to a taste of the towering Dolomites and Italian Alps. It's a huge county and we've spent precious little time exploring but we've definite liked what we've seen. Apropos the feel-good factor, we've had lots of very friendly gestures and smiles because of the truck, probably more so than any other country so far.

At the coordinates shown now where we're going to kip. We're in an area that's heavily dominated by orchards and vineyards, and surrounded by Alpine mountains. Right next to us is a clean and clear river, in which I've had a top wildlife sighting in the form of a viperine water snake. I was scanning for any old aquatic life and spotted this particular specimen of about 120cm lurking on the river bed half concealed by rocks and algae patiently waiting for prey.