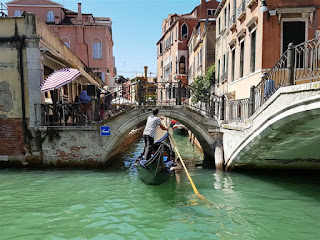 Italy presented well this morning. We travelled the smaller roads rather than the autopista between Slovenia and the Punta Sabbioni, and all looked well. The civic pride was impressive, the landscapes were pretty, the driving was restrained and there was a general sense of a region at ease with itself.

I'd chosen (in my lashed-up quarter of a plan) to try to get to Venice by taking a boat from Punta Sabbioni as we'd read loads of horror stories about not being able to park - and motorhomes being broken into - if trying to visit from the usual day-tripper route to the north of the city. It wasn't exactly clear from limited research just how this might all work out but it actually went splendidly well.

The Jesolo peninsula to the south of Venice that has to be traversed in order to reach Punta Sabbioni is very heavily touristed and full of shonky looking funfairs and what have you, but it also - on its quiet back roads - has some great saltmarsh / estuarine habitat to explore. We didn't have time, unfortunately, and headed straight for the tip of the peninsula in order to bag a boat.

Of course, first we had to park. There are numerous, large, dedicated car parks in the vicinity of the boat departure points and the nice Italian attendants will do their best to charm you and relieve you of €25 for the privilege of a day-spot. What they don't seem quite so keen to share is that if you poke about a bit you can find metered parking in public places close by at a cost of €1 or so per hour. We chose the meter option.

Boating across to Venice was a non-issue. There are numerous boats, some of them huge, and they run almost permanently. We paid €12 each, return, and were set fair. The trip over is pleasant in its own right and lasts about 30 minutes.

What can I say, from the opulence of the boats at quayside, through the architecture and charm of the city's layout, to the awesomely skilled gondoliers; to my genuine amazement I really enjoyed Venice. Sure, it's absolutely rammed with tourists and every conceivable device for relieving tourists of Euros, but the physical fabric of the city, from the architecture to its layout, is preserved extraordinarily well. The place manages to rise above the cheese and retain sobriety and dignity.

I was expecting to have my usual cynical prejudice confirmed but I was wrong. It's worth a look, in exactly the same way that most 'must-see' cities usually aren't!

After the return to Punta Sabbioni time was getting on a bit so all we've done is head towards Treviso a bit in order to set ourselves up for the parkrun there tomorrow.

Tonight's overnighting spot (coordinates) is simply functional rather than recreational - or rather we hope it will be, because if we're drifted or otherwise disturbed we have no immediate contingency.