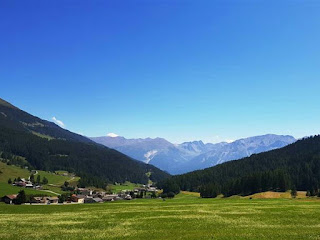 After whistle-stopping Liechtenstein we decanted back into Switzerland for a couple of hours of going up or down in a picture postcard (there is no flat), before crossing the border into Germany and  pretty arbitrarily landing at the coordinates shown (with no help from the satnav but some help from the diff lock), where we're going to kip.

Switzerland never ceased to be amazing. Emma summed it up well by describing it as being like a full-scale children's farm set. It's almost too perfect in every detail to be real, even the grass is suspiciously green (pic).

By contrast, and not that it's a disaster, Germany immediately felt and looked different and confirmed the trend we've noticed over this past few years of looking a bit tired and dog-eared: it's definitely and quite swiftly changing. There's an omnipresent if vague air of 'letting stuff go' and general dissatisfaction. Whilst ruminating, we recalled all those high-end German sports saloons and lavish Teutonic houses we spotted in the south of Bosnia and Herzegovina. Maybe this kind of exodus is no coincidence.

Anyway, it's been a long day so all we've done this evening is catch up on some domestics and watched a bit of telly. In any event, for the first time of an evening since the trip began, it's drizzling!