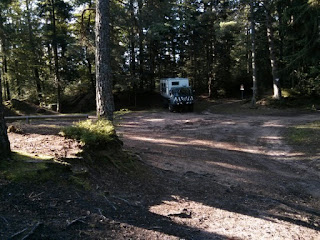 Just before bed last night, on the floor of the truck, Emma-the-vector-pathologist discovered a tiny unidentifiable object that apparently - given the correct light - could have, to some eyes, possibly resembled a tick. Close (actually, very close) inspection with my loupe was inconclusive but strongly suggested it wasn't, in fact, The Enemy. The object's lack of legs and catastrophic failure to look much like any kind of animal was something of a giveaway.

Said unidentified object was dispatched by means of a piece of kitchen roll to the great outdoors and the forensic decontamination process began. I lost count, but think the entire truck interior was thoroughly swept four times in total before we were declared 'clean'; but still very much on red alert. My contributions to this episode were, on reflection, not especially helpful and I was spoken to in stern if arguably irrational terms that included colourful Irish vernacular.

To today, then. The drizzle has continued on and off all day; quite a shock to the system after what's basically been a month-straight of wall-to-wall sunshine and temperatures of between 30 and 40°C.

We traversed Germany pretty quickly stopping only to fill the tanks with diesel (€1.24/l) and ourselves with fresh bread. I'd avoided filling (with diesel, not bread) in Italy (up to €1.50/l) and Switzerland (up to €1.60/l), and have no intention of undermining the gilets jaunes' cause by taking on fuel in France at a massively politically-inflated €1.50+/l. A little bit of holidaying, a little bit of parsimony, and a little bit of passively aggressively bucking against a corrupt and incompetent political elite. Win-win-win.

Lunch on the German / French border at the Rhine was a nice way to continue my ongoing obsession with this river and now we find ourselves by no small accident nestled in the Vosges mountains (coordinates and pic). It's a lovely area, steeped in history and provides a step-change in the habitats we've encountered so far on this trip, being more suggestive of a Scandinavian pine forest than anything. Bilberries anyone?

We're also here to chappau Thibaut Pinot in our own little way. Incredible athlete, friend of animals and understated good-guy.

We've had a walk in the hilly Vosges woodlands this evening and I've once again heard a really distinctive bird call that I also heard in the upland woodlands of Bosnia and Herzegovina. This trip is the first and only time I've heard it but I haven't been able to see the bird, can't identify the call, and it's driving me nuts.