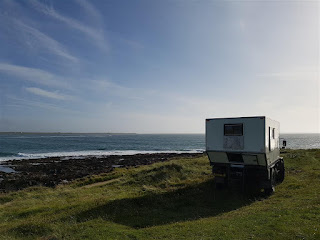 Blogging at 22:30 on Friday 14th August from N 54.22899°, W 10.06061° / http://maps.google.com/maps?q=loc:54.22899%2C-10.06061
This morning saw more wind and rain, putting paid to any reasonable chance of seeing much out to sea so we headed off inland to have another look at The Wild Nephin; a largely untrammeled and unmolested area of upland peaty wilderness. In summary, it's what it claims to be. We've been before but it was particularly wild today in the lashing rain. It gave up some excellent landscapes and was pleasingly empty. We saw no other humans but did see a few hardy birds and more mountain hares.
Thereafter we headed coastward again and specifically for the Béal an Mhuirthead peninsula - and even more specifically for the Blacksod Lighthouse. It was from here that the keeper supplied intelligence of the impending Atlantic storm that would severely compromise Operation Overlord and the D-day landings. The actual report sent is documented in the lighthouse itself.
We've visited all the D-day beaches and learned from there of this crucial warning so it was good to make this connection. Without overstating it, the message was clearly right up there in terms of being something of a seminal course-of-history-changing moment; goodness knows how many lives it saved / cost.
From the lighthouse we had a ride out on the bikes and chanced upon loads of different points of interest ranging from ancient stone circles through war-relic buildings to ancient graveyards. Fair to say there's plenty to see and do in the area and it's all set amongst superb vistas. At the southern end of the peninsula we saw a good dozen motorhomes and campers including a few from the EU. Tourism clearly isn't in full swing by a very long way but we have now seen maybe 30 campers since arriving in Ireland including German, Dutch, Belgian, British, Spanish, French and, unsurprisingly, Irish.
Post bike we pootled to the north end of the peninsula to the coordinates shown where we've stayed before. It's quieter up this end and there's a nature reserve right next to where we're kipping that's being managed for - and reportedly supporting - corncrake. We've never heard or seen one outside of eastern Europe so fingers crossed... again. The view from the overnighting spot is excellent (pic) and has given up the now-expected birds, most notable amongst which have been turnstone and whimbrel.
Sent from my mobile device
Posted on: Saturday, August 14, 2021