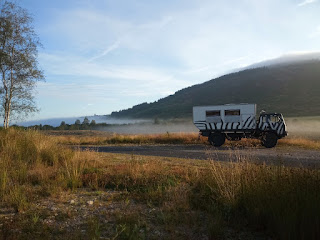 Blogging at 20:30 on Wednesday 4th August from N 54.94097°, W 04.72319° / http://maps.google.com/maps?q=loc:54.94097%2C-04.72319
There were some super barking-fox and deer noises during the night last night and we woke to some almost-autumnal layered mist (pic). A decent start, then.
A steady trundle along the back roads of Dumfries and Galloway leant itself to some fantastic feel-good, the landscape in this part of Scotland is subtly spectacular and never disappoints... us, anyway.
We spotted the expected birds and wildlife on-route but also saw red kites and muntjac deer. I don't remember seeing kites here before and have lamented only quite recently how muntjac numbers seem to have nose-dived in recent years. I suspect much culling has gone on.
At the coordinates shown now where we hope to kip. I had an hour out on the bike on forest trails and back roads while Emma chilled and read in the pleasant afternoon sunshine. It seemed sensible to make the best of the warmth as it seems inevitable we'll hit some bad weather tomorrow.
High winds and heavy rain are forecast, just what you need when you're crossing the Irish sea at half seven in the morning whilst forced to spend the entire journey out on open decks.
Ordinarily, we'd use the crossing to just laze about and eat ferry-chips (naturally), but the threat of C-19 means that this time this is just not going to be an option.
As has been covered in other travelogues, Emma and I occupy vastly different sectors of a normal distribution curve when it comes to risk aversion; plus, it's difficult to counter the assertion that driving rain and 70mph winds on the open deck of a ship in the middle of the Irish sea is, in all probability, a suitably challenging environment for virus efficacy.
I'm not sure if she's considered the consequences of the almost inevitable alternative of hypothermia, but for sure there'll be no ship-chips tomorrow.
Sent from my mobile device
Posted on: Thursday, August 05, 2021