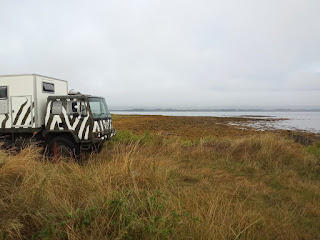 Blogging at 21:00 on Thursday 5th August from N 54.39352°, W 05.57459° / http://maps.google.com/maps?q=loc:54.39352%2C-05.57459
Well, it was indeed as cold and wet on the ferry as feared, and it hasn't stopped being just as wet, if slightly less cold, on the Ards peninsula.
We've wanted to have a look at this peninsula for quite a long time as it's well known for birds, and also for cetaceans (in Strangford Lough), including the occasional humpback and orca.
In spite of the incessant rain and sometimes gusty winds we've made a fist of it and dutifully pootled around all four corners. We've now settled for the evening at the coordinates shown (pic) and have nice views over the lough, a small nature reserve called Ballyhenry Island, and a couple of wrecked vessels.
It's a grand spot and we've lazily watched lazy seals and a wealth of mostly anything-but-lazy bird life. Notables have been black guillemots, common terns, a turnstone and a totally unexpected great skua.
As an aside, whilst parked having lunch today we were approached through the steely drizzle by a very sophisticated looking, older lady, who very politely asked if I might help her turn off the hazard-warning lights of a borrowed car she was driving. She explained at some great length and with impressive articulation how she'd found herself in the embarrassing position of driving around the Ards peninsula in an unfamiliar vehicle with all four indicators just steadfastly refusing to stop.
Well, of course I was prepared to help such a sophisticated and articulate lady. A couple of seconds in the car saw the offending switch located, depressed and hey-presto: hazards quelled.
Stony-faced, she slowly looked at me, looked at the switch and then boomed 'I ALREADY PRESSED THAT *#@&*@! SWITCH TURTY TIMES'.
We knew we were definitely in Ireland.
Sent from my mobile device
Posted on: Friday, August 06, 2021