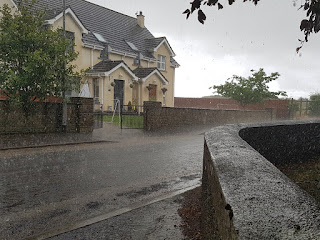 Blogging at 22:00 on Friday 6th August from N 54.08819°, W 06.12842° / http://maps.google.com/maps?q=loc:54.08819%2C-06.12842
It rained throughout the night last night but come morning it eased a bit... and then it started again. And then it turned to hail.
Who, then, would have been daft enough to trust a whimsical easing of such biblical weather to risk a quick spin out on the bikes to see more of the Ards peninsula?
Suffice to say that we encountered such a hail-battered soaking (pic) that we'll be drying stuff out for days.
Following an hour with the truck's heaters on full chat over a blue-lipped lunch we left the peninsula via the Portaferry, err, ferry; and then sploshed our way south west to the Mourne mountains: they're all they're said to be and today, at least, looked particularly striking and moody.
The rain's continued relentlessly throughout the afternoon and into the evening so we've pretty much been pinned down and have spent a long time arguing over whose soaking wet trainers / cycling shoes stink the most vile (probably mine, on balance).
We're at the coordinates shown now, a nice little car park next to a waterfall at the end of a mile-or-so long twisty road that wasn't big enough for the truck. We normally avoid overnighting in formal parking spots but sometimes do if they look like they might be unused between sunset and sunrise. Fingers crossed, then.
We met the local farmer here who stopped on his quad to ask all about the truck, he was genuinely interested in the concept and took a long time to consider the layout, fixtures and fittings. I was conscious whilst we were talking that for the first time we were in the odd position of mild ambient temperature, 100% humidity, persistent rain, loads of soaking clothes; and that our usually decently effective ways of drying stuff out were compromised with this particular combination of conditions. Hmmm...
While the farmer was around I could hear some bird calls I wasn't sure about so after he left I had a scout about and found probably the biggest flock of twite I've ever seen. Bonus.
First thing in the morning we're heading for Rostrevor parkrun. It'll be the first parkrun for us both since very early 2020. We're sure to underperform but I'm confident we'll be right up there in the stinkiest-trainers competition.
Sent from my mobile device
Posted on: Saturday, August 07, 2021