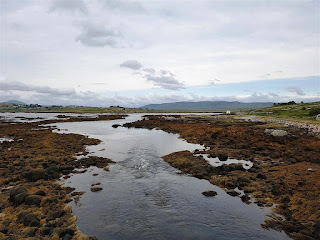 Blogging at 21:30 on Tuesday 10th August from N 53.30565°, W 09.53179° / http://maps.google.com/maps?q=loc:53.30565%2C-09.53179
It's fair to say the last few days have been quite draining so we decided to slow things down a bit today and have only driven about 40 miles.
First up, we visited some gravel tracks we know that we're laid to serve moorland peat workings in Connemara (one of my favourite regions in Ireland). On the splendid gravel tracks we had about an hour's session on the equally splendid gravel bikes; how could we not?
I've banged on about it before, but the landscapes in Connemara are worth a look. Whether they appeal or not is a very subjective thing but there's no denying they're distinctive.
After the morning bike we went to a place that we've stayed at before - an inlet off Camus Bay - to lazily watch the tide come in and to see what we could see (pic).
It was a splendid way to spend the afternoon. There was lots of bird life (including a solitary bar-tailed godwit and a couple of whimbrel) but the stars of the show were once again mammals. We had excellent common seal sightings (they aren't that common), an American mink, and the real show-stopper... an otter.
It was a truly super otter slighting and we were able to watch the same individual, a very large adult, scouring and feeding in the bay for well over an hour.
It was a good break from the incessant intensity of our, errr, break; and even the weather was kind with only the occasional very light misty-style rain to occasionally dodge.
We're back on the gravel now at the coordinates shown and hunkering down as more heavy rain is apparently due...
Sent from my mobile device
Posted on: Wednesday, August 11, 2021