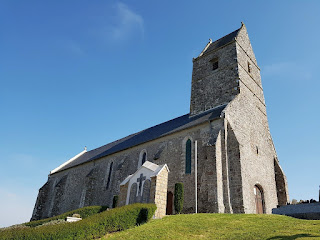 Blogging at 22:20 on Thursday 21st April from intended overnighting spot N 48.98449°, W 01.45998° / http://maps.google.com/maps?q=loc:48.98449%2C-01.45998
The morning loomed grey and murky, the first time on this entire trip it hasn't essentially been just been fine, sunny and settled.
Not to worry, though: the cirl bunting had stayed with us overnight and just as we were ready to break camp landed on a bush directly in front of the truck, from where it gave us a trilling farewell. Simple pleasures and all that.
We had a bit of ground to cover this morning but it all went pretty uneventfully. The monotony of the autoroute drive east was broken to some degree by the site of four vans in close convoy displaying IRL plates. The first of these was liveried up with 'Cork City Missing Persons Search and Recovery'. This struck us as being a singularly specific mission statement, not to mention the extremely purposeful convoy itself being a somewhat incongruous sighting. A quick check by Emma-the-Googler revealed the Cork City Missing Persons Search and Recovery concern is a bona fide entity; and had recently dispatched a humanitarian convoy to the Ukrainian border. With that we considered the conundrum both heroic and solved.
Well, sort of. Quite why the city of Cork needs a concern that has at least some people and one van dedicated to the search and recovery of missing persons is one for the back-burner.
By lunch we were back in the Department of Lower Normandy and the crossing of the border was palpable. We were instantly back to clearly far more sympathetic agricultural regimes and an architectural vernacular that wasn't quite so monoculture-rural-Germany.
Also, quite by coincidence I'm sure: the sun came out. With feel-good factor brimming we stopped for an early lunch at a totally arbitrary riverside and enjoyed watching our first sand martins of the year re-establishing their nest burrows. Lunch itself comprised some just-obtained and reliably splendid boulangerie products.
It was during this lunching process that I noticed Emma had a considerable quantity of pain-au-chocolat residing on one cheek so I politely pointed this out. There followed a tortured post-mortem, during which it irrefutably transpired non of Emma's lunch had actually comprised pain-au-chocolat.
Suffice to say that the offending 'barely-visible' smear had (at best) been in-situ since breakfast and so had undoubtedly cheerfully accompanied her into her most recent boulangerie foray.
Some events quickly fell into place: she had earlier independently reported how this morning's boulangerie visit had met with an exceptionally friendly, attentive and smiley attendant...
This kind of involuntary storage of edible fare is not entirely unknown with Emma. I've personally witnessed mysteriously healthy quantities of mashed potato lodged in her hair... long after the relevant dining experience. Porridge has also similarly featured. Whilst she was at work.
No one really understands why this happens but I've learned it's something best not dwelled upon
Lunch done and a bit of a facial clean up saw us back on the road for a gentle bumble to the current coordinates where we're hoping to overnight. We arrived quite early but decided to have a lazy afternoon that included some less than lazy Famous Five biking round some sleepy lanes and villages. The spot is peaceful enough and we have yet another amphibian chorus for company from some wetland a field or so away.
As an aside, and as much for my own future recollection as anything: in earlier posts I forgot to mention that cicadas are just about starting to sing here-and-there, but are a long way short of full-on cacophony. I also forgot to mention a hunting bat encounter where the animal was so close to the truck it was possible to hear it actually feeding. In spite of some expressed concerns, it did not get tangled Hollywood-stylee in Emma's hair.
Sent from my mobile device
Posted on: Friday, April 22, 2022