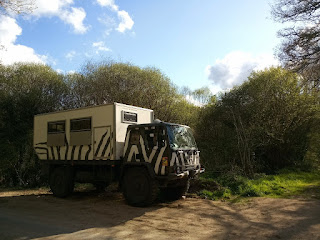 Blogging at 22:20 on Wednesday 20th April from intended overnighting spot N 48.66651°, W 02.85072° / http://maps.google.com/maps?q=loc:48.66651%2C-02.85072
The camp last night (pic) turned out to be worth the levelling-up effort, it was fantastically peaceful and the woodland birdsong this morning was once more a joy.
From the camp we headed north to the Cote de Granit Rose. As it says on the tin, the area is celebrated for its pink-coloured granite coastline and it's routinely billed as one of Brittany's star attractions.
It's also incredibly overpopulated, over-rated and over-touristed. Many roads here simply ban anything over 3.5t and also separately and very purposefully ban motorhomes full stop. The area is full of tourist infrastructure / tat, and the most productive thing I could say is that it would seem the area is an increasingly imploding victim of its own self-important success.
There are indeed some huge, pink granite rocks to be seen, but they ain't that special and we've certainly seen considerably better in far less trumpeted places around Europe. At least we've glimpsed it now: even if we rather wish we'd have spent the time more wisely.
Speaking of... we're now at our intended overnighting spot at the coordinates shown having bumbled to it through a network of perilously narrow roads and super-tight villages. It again took some finding but it's a cracker with a real mix of vistas, including elevated sea views.
En-route we stopped for afternoon tea at a similarly-commanding spot but this was a formal car park where the overnight parking of camping cars was interdit (an ever-increasing theme in France). From this forbidden-fruit of a spot, a bit of casual time with the bins revealed a serin in full song (a first for Emma).
Back to the intended overnighting spot (camping cars pas interdit, naturellement). From it I've also had another first-sighting in the form of a cirl bunting. Now virtually extinct in England it's a 'British' bird that's eluded me for far too long. Happily - and without a great deal of effort on my part - it's elusiveness is now undone as there's one boldly singing in a pine only 25 metres from the truck. Now, if only this same let-them-come-to-me strategy would work for stone curlew...
Sent from my mobile device
Posted on: Thursday, April 21, 2022