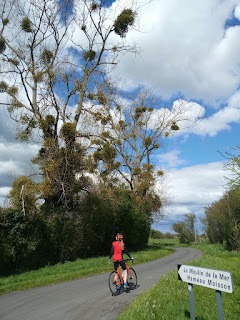 Blogging at 21:30 on Wednesday 13th April from intended overnighting spot N 49.37117°, W 01.17827° /
http://maps.google.com/maps?q=loc:49.37117%2C-01.17827
France did its civilised bit last night and we enjoyed a totally unmolested urban sleep.
Today's been cracking weather-wise and we had a very spirit-lifting morning bumbling westwards to one of our very favourite bits of France, the Parc naturel régional des Marais du Cotentin et du Bessin.
En route we managed to fill with diesel at €1.75 per litre (approx £1.45): ridiculous, but still significantly cheaper than we could currently hope for back home. Or perhaps ever again.
The landscapes of the Parc are just brilliant. There's absolutely no sign of the usual decimation resulting from biocide-driven, monoculture-obsessed, maximum-yield destruction; but instead a hark back to the more 'traditional' mixed-farming methods and landscapes of about 50-60 yrs ago. Indeed, the fields may not have been any different when the allied forces landed on D-day. Wild flowers flourish amongst unimproved / semi-improved pastures and meadows, with the occasional arable crop well and truly enclosed by mature, lush and abundant hedgerows. At any point. It's easy to imagine The Famous Five will pass by; with lashings of ginger beer, naturally. Unless they too have now been cancelled due to their grossly inappropriate value systems.
Unsurprisingly, the Parc teems with wildlife.
It's been a good day for more first-of-the-year summer-visitor sightings with swallows, reed warblers and sedge warblers all featuring. We've also had some less-expected sightings in the form of cattle egret, great white egret, spoonbills and fan-tailed warblers.
It's not just birds, we've also been treated to raucous frog choruses, plenty of deer and some rather-too-confident coypu.
Apart from the nature-fest, we even managed to find some decent gravel-bike trails.
We may have peaked early.
Sent from my mobile device
Posted on: Thursday, April 14, 2022