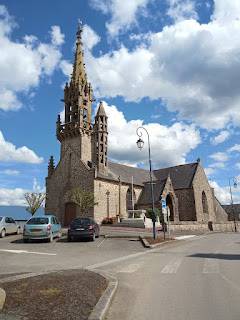 Blogging at 22:00 on Thursday 14th April from intended overnighting spot N 48.51665°, W 01.18572° / http://maps.google.com/maps?q=loc:48.51665%2C-01.18572
We've had a steady day, mainly pootling very slowly down tiny roads through equally tiny hamlets; whilst once again being continually impressed and somewhat jealous of rural French civic pride, civility, and general comportment. It's irrefutable, the rural French do not tend to spill out in the same way as the English. They don't impact their communities with visual clutter, noise or a more generalised selfish, anti-social, confrontational demeanour. There is no omnipresent yobbery, there is no litter, there are no threatening packs of feral adolescents.
It's not unusual at all for small villages to be so quiet and peaceful that it's easy to imagine the entire population has been the subject of alien abduction. In fact, if this were the American mid-west that would undoubtedly be the factual explanation.
It's entirely possible to pass through some settlements here without seeing a single person, witnessing a single car moving, or hearing a single noise.
It's civilised and dignified in exactly the same way that England isn't. There's a clear culture of mutual respect, not only between individuals, but also between individual and commune.
By mid-afternoon we were done pootling and reflecting and called the day's driving done. We parked up and went for a hopefully very quiet and hopefully non-intrusive bike ride through some typically quaint villages (pic) connected by some impossibly pleasing tiny lanes.
Of course, it would be naive to think this is a society without problems or discontent and our observations are undeniably superficial. We are not invested in the country and this disconnect perhaps reduces our cynicism. Without doubt, though, we've consistently and unerringly concluded over many years of French pootling that there's a collective civility here that's both palpable and enviable.
If you're not a boorish yob, it's just plain better here. If you are, stay in England: your country needs you.
Sent from my mobile device
Posted on: Friday, April 15, 2022