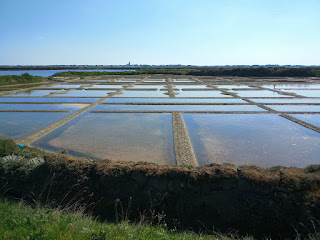 Blogging at 22:20 on Saturday 16th April from intended overnight spot N 47.43179°, W 02.43142° / http://maps.google.com/maps?q=loc:47.43179%2C-02.43142
Last night's camp continued to be eerily silent and we neither saw nor heard any other humans all the time we were there.
A brief wander around just after breakfast revealed a handful of 'processional caterpillar' webs right at the very tops of some of the pines we were amongst. I've never seen the caterpillars in processional action but it's reputed to be something quite extraordinary: and potentially troublesome.
After leaving the overnighting spot we've had a pretty focussed 'birding' day. First port of call was Brière Marshes (47.36060 -2.19860), where we spent a sun-baked couple of hours atop the truck seeing what we could see. The marshes are vast and undoubtedly represent the same area as a huge number of jumbo jets, Olympic swimming pools, or a proportion of Belgium.
The birdlife is extraordinary. From a vast list, the most notable species we saw were: yellow-legged gull, black terns, great white egret, black-winged stilts, white storks; plus a first for me in the form of a bluethroat.
Slightly reluctantly leaving the marshes we then headed to another well-known birding site, the Guérand Salt Pans (47.28480 -2.46930); where we saw more of the above - albeit not as abundantly - plus avocets.
The salt pans really are salt pans (pic) and continue to be worked, it seems, by small, hands-on type owners with spades and rakes - rather than having been 'industrialised'. There's a sense of a bygone era watching the leather-skinned attendees painstakingly working the pits. At a few locations amongst the pans it's possible to find bags of salt being sold from the backs of tatty vans. It's all very earthy and artisan and clearly attracts droves of earthy and artisan tourists. There were hundreds milling about on hire-bikes, as well as the hundreds more in / on motorised transportation.
Beyond the salt pans, the general area is clearly very touristy: unsurprising, perhaps, situated as it is at the mouth of the Loire and therefore at the end of the world-famous valley. We even saw a couple of huge cruise ships / COVID processing plants in ports close by.
It might have been possible to overnight somewhere in the area but the throngs put us off so we moved a few miles north. It's still uncomfortably touristy notwithstanding the gently drift northwards and we've seen a few aires de camping car around and about absolutely rammed to the gills. Fun this did not look.
At least the pootle around the area produced more cattle egrets and a black kite.
The overnighting spot we're now at is a bit of a sketchy one. It's grand, but possibly a little bit trespassy. It's at the end of a track that has some sort of limited public access; what we don't know is if we're of the correct sort of public. Ah well, all part of the fun.
Sent from my mobile device
Posted on: Sunday, April 17, 2022