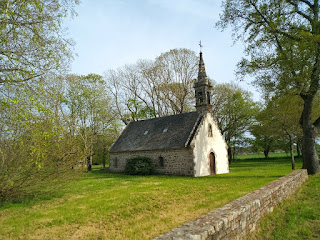 Blogging at 22:20 on Sunday 17th April from intended overnighting spot N 47.61928°, W 03.04913° / http://maps.google.com/maps?q=loc:47.61928%2C-03.04913
We quit the 'trespassy' spot at 09:30, so well before dawn by French standards.
From it, we bumbled less than a mile or so to somewhere incontrovertibly legitimate and made the most of a beautiful spring morning by flogging ourselves physically. Emma biked and I ran.
First port of call thereafter was yet another well known birding spot, a reserve at Marais de Séne (47.61690 -2.71270). It didn't disappoint and had a subtly different suite of 'regulars' including loads of black-tailed godwits in almost-breeding plumage, spoonbills; and a first for us both in the shape of spotted redshank. The redshanks were most probably on passage from Africa and were busily feeding up. They should be heading off any day now, possibly as far as the high arctic tundra to breed. It sounds so simple.
At this site we also saw a green hairstreak butterfly, which reminds me to report the past few days have also seen the occasional Camberwell beauty flit by.
After the reserve we continued westward to the area were now at. The entire area is known for literally thousands of standing and otherwise 'arranged' stones and we're hoping to have a look at a couple of the formalised sites tomorrow.
You don't actually have to try too hard to spot some of the the arrangements, just a casual wander round with the bins revealed a few dotted around and about. These weren't in any way celebrated, they just lay there amongst bits of random agricultural land and woodland; perhaps either very pleased to be left alone, or very jealous of their heavily promoted and tourist-gongoozled brethren. I suppose it's also possible they were just inanimate and unthinking stones, dragged and placed for some deeply superstitious reason(s) by our distant predecessors.
Of whom, someone should perhaps have told them that wearing lucky red under-crackers would have had the same effect in helping keep the world's evils at bay, but would have been far less strenuous.
The exact spot we're hoping to overnight at is one I've stayed at before and is one of the quaintest little churches to be found anywhere. It's full tale of existence and recent restoration is told (in French only) on information boards close by. We can only decipher the odd word of French but I'm pretty sure it says that the arranged stones around and about proved to be quite unreliable at stopping evil and miscarriages of natural justice, so our somewhat less distant predecessors thought it would be a good idea to invent very specific and formalised deity-based belief systems instead, and then kill anyone that didn't buy in.
At some point humanity may realise the answer is simply lucky red shreddies.
Sent from my mobile device
Posted on: Monday, April 18, 2022