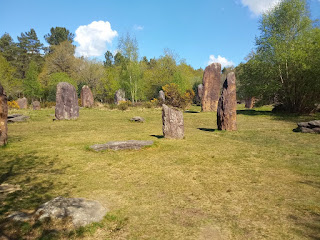 Blogging at 22:10 on Friday 15th April from intended overnighting spot N 47.86088°, W 02.12918° / http://maps.google.com/maps?q=loc:47.86088%2C-02.12918
It's been a day of cuckoos aplenty. From lunchtime onwards we've heard them constantly wherever we've been. Seeing them's been a different caper, though. At one point I stood underneath a pine tree for a full ten minutes with a cuckoo calling no more than 20 metres above me but even this close by, I was still defeated.
We've stopped off at a couple of touristy spots on today's short-ish drive. The first was a grotto / shrine dedicated to Notre Dame (who else) set in splendid forest surroundings. It was typically grand and clearly revered, but not much really differentiated it from the multitude of similar shrines to be found liberally sprinkled around every commune in every department in every region of of France.
The second touristy spot was the Menhirs of Monteneuf ...a site of (mainly) standing stones set (now) amongst splendid heath habitat. The site is different to most other similar ones in as much as it has some really well executed full-size reproductions of the kind of rollers, rails, sledges and lifting frames that the original builders are believed to have used to get the stones to site and place them once there. Adding to the charm is the fact it's very low key and all of the very nicely presented information panels are in French only. It feels like a very domestic tourist affair. A worthwhile visit.
From there we went out on the bikes again in what (for April) felt like searing heat. It must have been mid 20s by mid-afternoon. Not ridiculous, but something of a shock not long out of winter. The lanes and tracks were again very pleasant but in this area one of Emma's (many) paranoias came to bear: loose dogs.
In some localities around Europe, and even in some entire countries (we're watching you, Romania), it seems it's the norm to allow your pooch / pack of pooches to have free and terrorising access to the public rights of way passing your house.
That'd be all well and good if the liberated pooch(es) were happy just to lazily watch the passing world go by but in this locality the entire opposite is true.
In summary, we were hassled by various shapes and sizes of charging, vociferous and altogether rather unpleasant looking creatures on three occasions. In these circumstances, Emma has only one response: a maximal-effort sprint that goes on for at least a mile; and long, long after the defeated dog has returned home, re-marked its entire territory, had a drink, re-settled, and returned to its state of watchful snooze.
It turned out to be a hard ride because once in this groove Emma not only responds as above to actual dogs, but responds in exactly the same way in anticipation of potential dogs. Every single property with anything even looking like open access to the road is enough...
After surviving the searing-temperatures and sprint-intervals session, we pootled on a bit and found a nice spot to park up in order to shower off and drink some actual and potential coffee.
After some considerable disagreement about the concept of appropriate responses to potential coffee, we then pootled a tiny bit more to the spot where we are now. It's eerily silent here but for birds calling. Cuckoos are again calling like crazy but remaining steadfastly elusive.
Sent from my mobile device
Posted on: Saturday, April 16, 2022