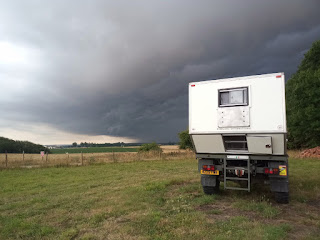 Blogging at 22:00 on Wednesday 20th July from intended overnighting spot N 50.39522°, E 02.61978° / http://maps.google.com/maps?q=loc:50.39522%2C02.61978
Proof if proof were needed of yesterday's temperatures: between 11.00pm last night and 6.00am this morning the fridge drew a full 10 amps. It was on for most of the night and its consumption made for a significant personal best.
Emma claimed that the pretty consistent overnight 30deg C meant - like the fridge - she barely slept a wink. Notwithstanding, she somehow managed to miss several shows of the entire countryside around us being lit up in the brilliant white of an electrical storm, and similarly missed some thunder foreboding enough to shake the truck. I wish I were able to sleep as well as she can't.
Thankfully, by the time we arose this morning we were back to a positively chilly 22 degrees and to the welcome news that the Four Horsemen had decided to back off a bit... for now.
It was an early start and the entire day's really just been about getting from last night's overnight spot to the one we're at now. The bits in between have all passed more or less without incident but have been punctuated with taking on fuel in Calais (€1.94/l) and a gradual re-aquaintance with the splendours of rural France.
Speaking of Calais, it's little-changed from the last time we were here, but has changed immeasurably since the first time we were here. The sheer scale of the migrant-control security fencing is testimony to the omnipresent tensions. The juxtaposed demographic of the town is palpable and we wondered aloud again how the dynamics of the place have changed so much in these past few years. The problems are complex and the town just feels like no-one - whatever their provenance - is in as good a life position as they might reasonably have wished for.
Tonight's intended overnighting spot is all a bit arbitrary and we find ourselves here as a result of simply deciding we'd travelled far enough and so turned up a pretty random gravel track and parked next to a nice bit of random semi-natural meadow.
We'd been here about half an hour when a jolly nice chap in the first vehicle we'd seen since arriving pulled up and very politely explained the bit of meadow we'd parked next to was private property and the owner might be displeased by our presence. Of course, we apologised and explained we'd chosen that spot because the meadow was obviously productive and that we appreciated the fact it was supporting all manner of bumble bees and grasshoppers.
The jolly nice chap seemed to appreciate our appreciation and excused himself for a few minutes to make a phone call. Result! The owner had indicated he was quite happy for us to walk around the meadow to our hearts' content; but didn't want us parking there. Instead, he kindly offered the use of an adjoining private field in which to overnight and enjoy the surroundings (pic).
So that's what we did - even after the rains came.