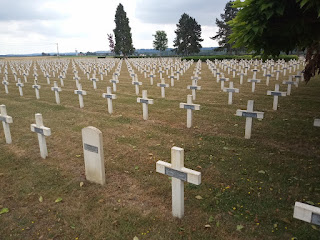 Blogging at 19:30 on Thursday 21st July from intended overnighting spot N 48.91754°, E 03.08670° / http://maps.google.com/maps?q=loc:48.91754%2C03.08670
It's been an intentionally relaxed day. Getting under way is always disorientating, so we've learned over the years to try to ease into trips steadily.
To that end we've spent the day meandering generally south on mainly deserted D roads and have made a point of actively absorbing the rural France we've grown to respect and admire.
As part of the bumble we passed through the Somme and - as seemed only right - took the time to call off at a couple of the department's war memorials and military cemeteries. There are countless such sites throughout the department and many are dedicated to personnel of specific nationalities. It was particularly ironic to find a cemetery plot dedicated to hundreds of Russian soldiers who died in WWII in an effort to stop a deluded and evil megalomaniac hell-bent on murdering his way to stealing territories and forcefully subverting terrified citizens.
As well as the cultural sites we've also casually spotted good numbers of brown hares, a couple of muntjac deer and at least half a dozen green woodpeckers.
The intended overnighting spot is one we've used before and is next to a cemetery dedicated to British personnel killed in both of the great wars. Following a suitable doffing of caps, we've both had a spin out from here, Emma ran and I biked.
In other news, the first insect victim of this trip turned out to be me. Whilst on the bike I inadvertently trapped a wasp in my groin and - suffice to say - was most aggressively stung only a few precious centimetres to the port side of some comparatively significant physiology.
Sent from my mobile device
Posted on: Friday, July 22, 2022