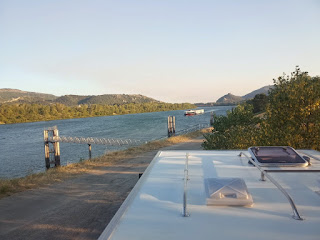 Blogging at 22:00 on Sunday 24th July from intended overnighting spot N 44.49815°, E 04.70411° / http://maps.google.com/maps?q=loc:44.49815%2C04.70411
The day started with more excellent bird sightings and the general area itself was so agreeable that we extended our stay long enough for a bit of a chill, which was also long enough for me to fit a short run in.
Shortly after leaving we encountered a couple of unusual cultural sights: one was a very serious looking pony-and-trap race meeting complete with all manner of very specialist looking vehicles and personnel, the other was a convoy of 2CVs - all in seemingly beautiful condition.
The day's drive has been one of two halves. The morning was dominated by a huge mountain pass heading south east out of Saint Étienne. It really was a beast and it took an age to top out. Basically, we made over a vertical kilometer in one hit - and then gingerly lost it all again dropping down the other side.  The truck didn't seem to mind much, in spite of the 30 degree C+ temperatures, but I did take it really steady both up and down.
Dropping off the mountain saw us well and truly in the Rhône valley and this has dominated the afternoons progress south. It's been stinking hot and it all feels a bit constrained. Essentially, if you want to head north or south (and make any progress) you're pretty much stuck with the main road on either the east or west of the river. Our usual preference for Pootling down back roads is not something that can be done here.
It's not that it's terribly unpleasant, but it is quite busy - something we've not really encountered in any serious way since arriving in France.
Temperatures by mid-afternoon were hitting about 40 deg C so we basically found a bit of shade and Emma went out on the bike heroically scavenging for an overnighting spot, which is where we now find ourselves.
It's basically right at the side of the Rhône next to a massive lock and hydroelectric power plant.
Lolling around just trying to stay even a little bit cool had seen us on the top of the truck optimistically waiting for wafts of breeze, whilst casually watching barges and cruisers making their way through the humongous lock.
From here  we've also seen more bee-eaters, black kite and a yellow-legged gull.
Here's hoping tomorrow isn't quite as oppressive...
Sent from my mobile device
Posted on: Sunday, July 24, 2022