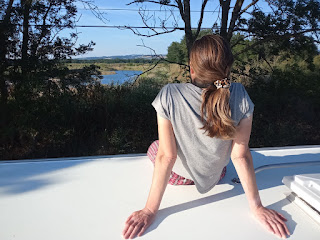 Blogging at 22:00 on Saturday 23rd July from intended overnighting spot N 45.76619°, E 04.19920° / http://maps.google.com/maps?q=loc:45.76619%2C04.19920
It's mainly been another day of pretty aimless bumbling, happily taking in whatever scenery we encountered having allowed the satnav to determine the shortest distance between where we were at any given time, and where I'd pretty randomly asked it to navigate to.
Shortest distance is rarely the most efficient way to get from a-to-b, but it does tend to be the most interesting. Especially when the satnav has been told it's working in a car and not a truck.
And so it proved to be. We passed through some excellent landscapes as well as the obligatory impossibility quaint villages, and also some genuinely interesting towns. We don't really do bigger urban areas but we did see a few today resplendent with walled perimeters, imposing places of worship and architectural cues speaking to a heavily fortified past.
Casual wildlife sightings en route included clouded yellow butterflies, black redstart and black kite.
Come late afternoon we decided to start to think about a possible stopover site and one turn down an initially disappointing-looking back road later saw us at tonight's intended overnighting spot. The deal was done as soon as we saw dozens of bee-eaters circling, catching prey and all the while delighting us with their melodious tropical calls.
It turned out we'd chanced upon a nesting colony; albeit that their nest burrows - in the face of a disused flooded gravel pit - could only be seen from the top of the truck (pic). Effectively, this meant the various occupants of the pit were rarely, if ever, troubled by a human presence.
The bee-eaters were only the start! What an incredible place for wildlife. For want of time I'll pass over the full description of how initially unprepossessing the pit might casually appear and instead just list the (more noteworthy) species seen during the course of the evening.
First up, a turtle dove - yay! Thereafter: black kite, hobby, kingfisher, coypu, brown hare, cattle egret, purple heron, squacco heron, sandpipers (exact species unknown) and golden oriole: all against the backdrop of dozens of bee-eaters constantly catching bees and disappearing with them into their nest burrows. Some of these species are ordinarily difficult or almost impossible to see until the Mediterranean proper; so to have them all concentrated on an innocuous few acres of former excavation works was just astounding.
Add in that the road we were on was basically just a dead end leading to a network of  gravel tracks that saw no more than the occasional recreational user pass through and, come dark, a fantastic cicada chorus, and it's not hard to imagine we were pretty upbeat about the whole deal. Once again, if you do stuff you see stuff and stuff happens.
Sent from my mobile device
Posted on: Sunday, July 24, 2022