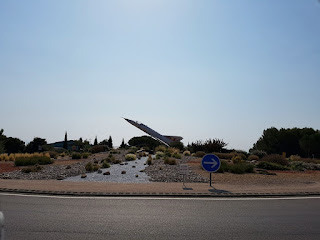 Blogging at 21:00 on Monday 25th July from intended overnighting spot N 43.12559°, E 05.86645° / http://maps.google.com/maps?q=loc:43.12559%2C05.86645
It remained extremely hot throughout the night last night and was still north of 30 deg C well after midnight. We survived, though, and by this morning it was just the right side of 30 deg C to be able to go for a run. We only did about 20 minutes each, but it was an extremely pleasant affair on a very leafy and superbly surfaced cycle-way that was well away from even the quietest of French roads. More bee-eaters and at least three more turtle doves helped to make the run easier and altogether helped with the feel-goods.
It's been astoundingly hot again throughout the course of today's drive, which - apart from the small matter of a bit of a contretemps with the law - was otherwise pretty uneventful. A sighting of Mont Ventoux (which we biked up a few years ago), the horrific rancid sprawl that is Marseille (sorry, the people of Marseille), and some good examples of ever-pleasing French roundabout art (pic), were pretty much all that punctuated the journey.
Before anything further about our transgression, I need to mention the entirely justifiably smuggest man in France. It was very, very hot and all the cyclist we saw on a particular stretch of cycle-way were most definitely earning their crust when amongst them we saw a skinny, heavily bearded and thoughtful-looking fellow scooting along at a cracking pace on a recumbent. He was clearly putting little to no effort in; and was also lying in wonderfully shaded comfort under the cover of a full length canopy.
A further look revealed the canopy comprised two whopping solar panels and the 'luggage' behind his seat was actually some serious-looking (maybe LiFePO4) batteries. So, he was permanently in his own portable shade, putting in hardly any effort and also benefiting from the undoubted cooling effect of his self-created breeze: all that remained unknown was whether he was actually going anywhere or simply demonstrating his genius. Either way: top marks, that man. I really must eat more lentils and grow a bigger beard.
The gendarm who upstandingly represented the nation of France did so because we'd inadvertently transgressed a 3.5t limit in taking a mountainous back road (that runs past the Paul Ricard motor-racing circuit, incidentally) on our final approach to Toulon. We'd seen that there were warning signs of a 3.5t limit but they seemed (to us) to suggest this related to a village centre somewhere off the actual mountainous back road. This kind of restriction is now a very, very common thing to find throughout the entire country.
It's fair to say there were a great number of these signs and that they were far more explicitly displayed than we were accustomed to, but our understanding of French is such that we didn't grasp the nuance. The nuance, as the very serious gendarm explained in very serious English, was that the entire mountainous back road was now a 'green way' and was out of bounds to anything over 3.5t: even anything over 3.5t driven by foreigners who had little grasp of French. This looked bad. I was contrite and apologetic and tried to offer we were following the sat nav; and that this had not warned of any troublesome weight restrictions. The gendarm quite rightly pointed out the satnav was not driving and, for a full 7km, the person who was driving (that would be me) had passed numerous large signs saying anything over 3.5t was not allowed.
This really didn't seem to be going too well.
I apologised again and said we were deeply embarrassed and more than willing to turn around, retrace to the start of the troublesome route, and find an alternative way to our destination. The gendarm indicated that the transgression would attract a fine of €90 but also enquired about our destination. I told him Toulon, and that the only reason we were going there was to travel on to Corsica.
The gendarm's face suddenly softened and he even cracked a smile. 'Corsica!' he exclaimed, and then he simply said 'You may go'. He then stepped into the mountainous back road, stopped oncoming traffic (all definitely under 3.5t, we noted) and waved us on.
As with so many things whilst travelling, it's probably sometimes best if you don't understand why some things happen.
Anyway, we're now at our intended overnighting spot from which we can quickly and easily (we hope) make the port of Toulon in the morning. The spot is just a random bit of tarmac on the periphery of some sort of ZA zone (a small and quite posh small-business area) but is totally unmolested, is thronged with a cicada chorus and supports a healthy population of yellow-legged gulls: probably intent on eating cicadas.
Sent from my mobile device
Posted on: Monday, July 25, 2022