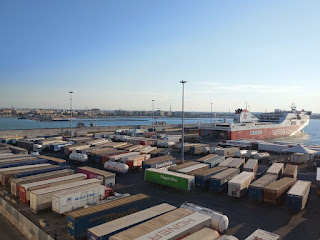 Blogging at 21:30 on Wednesday 3rd August from N 41.07198°, E 17.19576° / http://maps.google.com/maps?q=loc:41.07198%2C17.19576
Unsurprisingly, not long after going to bed last night dogs started barking and yowling, and music from some or other venue again put paid to an easy night's sleep. Even the appeasing lapping of the sea did little to dull the audible assaults.
Morning saw an early start and we both did a long-shadows run before the inevitable temperature hike. It was - apart from the carpet of garbage - quite enjoyable, with bee-eaters overhead and the occasional serin jangling away in the pines.
Following the run I took advantage of a calm sea and - for the first time since C-19 meant that all pools were closed down in February 2020 - went for a swim. It wasn't as bad as I'd feared but two and a half years without striking a freestyle-bat did see my arms and shoulders quickly fatigued.
I should have mentioned before: compounding the littering and fly-tipping blight is the fact that the entire area where the problem has been most acute is designated a national park; mainly because of its maritime / saltmarsh habitats. Seeing it so casually and selfishly spoiled is hard to bear. Sadly, the destructive theme continued as we started the drive south where all the lay-byes were so rammed with everything from industrial waste to second-hand toilet paper that it was genuinely impossible to even pull into them anymore.
Sadly, not being able to pull over meant we were forced to keep driving through some really excellent saline / brackish habitats, including some commercial salt pans that supported huge populations of interesting birds. The more obvious ones that we could pick out whilst driving were flamingoes, squacco herons and avocets.
Eventually, I did manage to find somewhere on a track leading to a smattering of small agricultural plots just big enough for the truck and from there managed to spot little-ringed plover, black-winged stilts, ruff, hoopoe and more of the stuff we'd already spotted in the general area.
The saline lagoons around and about stretch over a vast area and it's probably the best place in Italy that we've personally encountered for bird life. Again. it's such a pity it's so wretchedly sullied.
Shame on those responsible at every level. As before, it's not as if this country is so lacking in personal and national wealth that things have to be this way. At least with Montenegro and Romania there's a fair argument that there just isn't enough public money to create the infrastructure required for effective waste management. Again, Italy is a G7 member and, utterly fallaciously in my view, trades on a reputation of beauty, style and culture. Personally, it looks to me like they peaked about 1,800 years ago and the steady decline since that point continues...
The last leg of the journey down to the port of Bari was punctuated with a stop-off at a supermarket to grab a few fresh and fridge items like tomatoes, yogurts and bread. And beer. And wine.
Almost into the port city of Bari, which is a huge sprawl, we saw two lots of parakeets flying around. We weren't close enough to ID them with confidence but a quick look at my guides suggests (from the distribution) monk parakeet, which have apparently done quite well in Italy having escaped and naturalised.
The port of Bari itself is huge (pic). After formally entering the port site we had to drive for a further 2.5km to get to the right bit. It's also chaotic but with a bit of patience and persistence we found our way to the office we needed to be whereupon Emma-the-Intrepid managed to sort the check-in process without too much faff. A Belgian-registered MAN based overlanding truck clearly hadn't quite worked things out and caused about five minutes' worth of traffic-jamming whilst they were turned and re-routed. Nice truck, though!
The ship we're now on is operated by Ventouris Ferries and is clean, tidy and well attended. We'd expected Corsica Ferries boats (operated out of Milan) to be like this but they just weren't. The Corsica Ferries boats and service experiences should have been a warning shot as, like most if the Italy we've encountered, they felt chaotic, down at heel, just about hanging together, and altogether a bit skanky.
Sent from my mobile device
Posted on: Thursday, August 04, 2022