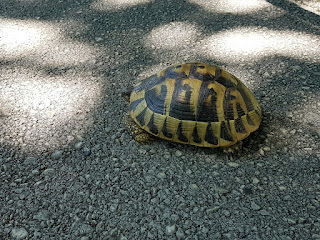 Blogging at 22:00 on Thursday 4th August from intended overnighting spot N 40.07168°, E 20.74191° / http://maps.google.com/maps?q=loc:40.07168%2C20.74191
The ferry journey over from Italy was as smooth as it's possible to be. We didn't feel any pitch or roll whatsoever.
We were woken at about 5.30am by the ship's tannoy system announcing arrival at Corfu. It seemed rude not to get up and have a look and it all looked very pretty and peaceful in the first light of the day.
Just about an hour later we reached the mainland and we ourselves disembarked at Igoumenítsa. The port exit process was slick and efficient and in no time at all we were trundling vaguely northeast and into the Greek mountains.
The difference between the chaos and bustle of Italy was immediately palpable. Everything was immediately just much calmer and an extremely welcome sense of order and calm prevailed.
Literally, within a quarter an hour of driving on the very lightly trafficked and (thankfully) fly-tip-free roads we were both feeling much better about just about everything.
The mountainous scenery was immediately impressive and has just improved as the day progressed. It really is jaw-dropping with immensely rugged peaks, arboreal hillsides and splendid river valleys.
It was also immediately apparent that we'd be spoiled for choice regarding lunch stops and stopovers. Blessed 'normality' had returned.
Until we encountered the first suicidal tortoise of the day. It wasn't even lunchtime before we found ourselves taking a protective position in the road, sticking the hazard lights on and leaping out to help one of the grumpy-looking cumbersome little chaps off the road and into surrounding undergrowth.
By lunchtime we'd helped three. At the last of these Emma had just emerged from the undergrowth having mastered the art of tortoise scooping when a car appeared and stopped alongside the road-blocking truck. It was the police. A stern-faced female officer enquired of the just-emerged Emma what the problem was. She simply responded 'Tortoise rescue'. The office smiled, said 'Thank you, miss' and drove away.
The road also threw up another extraordinary sighting in the form of the largest grasshopper / cricket-type creature I've ever seen outside of the tropics. A huge, green, elegant looking animal was - for some unfathomable reason - risking life and all six limbs by sitting right in the middle of the road. I was easily able to miss it but made a mental note of its features and was later able to ID it from my insects book as Saga pedo (it has no accepted English name but is sometimes locally called the predatory bush cricket). They are indeed seemingly one on Europe's biggest insects and apparently spend a good deal of their life eating smaller versions of themselves.
They should certainly be able to thrive here: it's teeming with grasshoppers of all shapes and sizes. Never a bad sign.
By early afternoon we were ready to call it a day so followed a fairly random track that had a brown sign at the foot of it suggesting a place of tourists interest.
It turns out that the place of interest is now our intended overnighting spot and is an absolutely incredibly lavish and exquisitely presented tiny place of worship. Though the gate to the building and the building itself were locked, the actual keys to the locks were helpfully left in the locks themselves. It seems this is possibly a low-crime area.
There's plenty of rough ground to park on a little way away from the 'mini-church' and it's both surrounded by fantastic vistas and engulfed in cicada song. From here I've seen short-toed eagle and a huge number of large and colourful flying beetles. I can't identify most of these but a few at least are vivid green / bronze and are most likely rose chafers or relatives.
Speaking of insects, hornets (multiple) are also patrolling and their patch includes the lorry. Emma is - predictably - in no way over-reacting to this fact. In one example of her definitely very normal and entirely appropriate reaction she dived with limbs thrashing so wildly into the cover of the insect-proof safety room (aka the shower) that she managed to cut her foot en-route. The hornet didn't seem terribly sympathetic. In fact it didn't seem terribly anything and just flew out of the truck to continue its rounds.
As we retire to sleep we're finally reunited with the noises of the natural world only. Stridulating grasshoppers and crickets have now replaced the chirpings of cicadas and that's all there is to hear. We're not missing Italy.