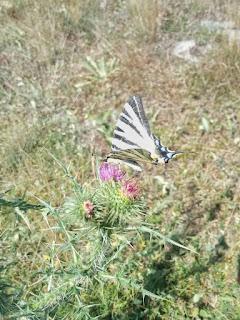 Blogging at 22:30 on Sunday 7th August from intended overnighting spot N 42.18284°, E 21.02316° / http://maps.google.com/maps?q=loc:42.18284%2C21.02316
We ran first thing in the blessedly cool mountain air and in doing so checked out more of the crumbling, narrow track to Kosovo. It looked borderline but just about possible given concentration and a great deal of bush-bashing. Notwithstanding, given its state, it really did look like this route over the border might now be defunct.
Enter three extremely friendly Macedonian chaps in a pickup heading up the track to do a bit of fishing. Using a combination of Spanish and English the three chaps confirmed the track did indeed physically extend into Kosovo but it was 'narrow', with 'big holes', 'trees' and we had to 'take care'.
They were genuinely very friendly and helpful and reflected the nods, smiles and waves we'd encountered from other (non-driving) locals since entering the country.
With some trepidation we took the track on and though it was indeed genuinely challenging we made steady progress, albeit this was definitely one where the aluminium window shields earned their keep a thousand times over.
Giving it a go was genuinely rewarding, it felt like we were seeing the national park at its finest and some of the habitats we encountered en-route were truly top-drawer. One bit of unmanaged open grassland in particular stood out and we stopped off a while. It was rich in wildflowers and hosted the most butterflies, bees and other winged insects I think I've ever seen anywhere in the wild. I wasn't able to ID many of them down to species level but there were skippers, fritillaries and blues in huge numbers. As well as these, there were more recognisable species like marbled white, southern white admiral and scarce swallowtail (pic). As well as the pretties there were also plenty of scaries, too. One digger wasp had caught a bee and had paralysed it, presumably before an intent to take it back to its nest burrow to provision it's young. Driving a truck up a sketchy track didn't seem like a bad roll of the dice by comparison.
About 45 minutes and five miles up the deserted track we came across the totally unexpected sight of a large inhabited building; inhabited even more unexpectedly by the police. This was strange. As we approached a smiling officer appeared, casually waved us down and asked both where we were from, and where we were going in 'this monster truck'.
I explained, and was then smilingly informed the border, still some miles away, was absolutely most definitely closed to us. Ah well... at least we'd seen some genuinely remote and beautiful Macedonia. And the world's strangest Police station.
And so, after a trepidatious re-trace, we were pitched back into the madness of Macedonian traffic and to the mercy of single men driving extremely high powered, growling German sports saloons on Swiss plates. Like idiots. There is something very strange going on here.
80km later saw us at a thankfully open border-control point into Kosovo. There was a bit of a queue to get out of Macedonia, where we were spun by some very pleasant customs officers and police who, it seems, really just wanted a look at the truck. More friendliness followed at the Kosovo entry point and the official there could not have been more helpful. As part of the process, he was about to stamp my passport but enquired regarding our plans for ongoing travel, and whether that might involve entering Serbia. We told him it did and, upon learning this news, he put the stamp down again. We knew from research before the trip that the Kosovo > Serbia border crossings can be problematic; the helpful gent confirmed this fact and left our passports Kosovo-stamp free.
Furthermore, the green card insurance scheme is not recognised in Kosovo so we knew we had to obtain cover to be able to drive legally. Again the super-helpful gent explained very clearly how this was done. Armed with the info, Emma-the-ambassador dutifully disappeared with a wad of documents and €15 into a back office.
Whilst I waited, several people crossing the border on foot stopped to talk and all were incredibly friendly and welcoming. We were wished a happy stay in Kosovo at least half a dozen times. 15 minutes later and €15 lighter we were fully insured (well at least we had a document saying we were), and headed off.
Initial impressions are of a far less frenetic place traffic-wise than Macedonia and, reassuringly, almost all vehicles are locally registered. We didn't have time to do much more than head for the high ground of the Sharr mountains and that's where we currently sit. Again it's a location that supports apex predators, so we're ever hopeful.
Worthy of mention: when we first arrived there was a group of locals finishing a barbecue quite close by and as our paths crossed they too were very friendly and welcoming, again wishing us a great stay in Kosovo.
Fair to say we feel very welcome here.
Sent from my mobile device
Posted on: Tuesday, August 09, 2022