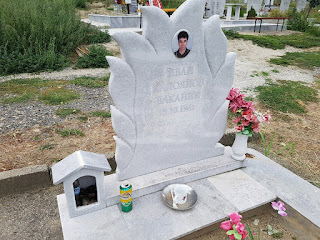 Blogging at 22:00 on Wednesday 10th August from intended overnighting spot N 41.85200°, E 23.13186° / http://maps.google.com/maps?q=loc:41.85200%2C23.13186
After going to bed last night I heard a bit of crashing around in the forest and this morning, just a little way behind the truck I found some deep trotter imprints and a heavily trodden track through a grass verge leading into the forest. Everything very reliable pointed to wild boar.
After leaving the camp we settled into a very civilised drive that was redolent of our Greek experience. Roads were quiet, towns and villages were generally affluent and civilised, and the driving far more restrained. Landscapes were pleasing, birdlife good and all was well. Initial impressions were good.
From about lunchtime to mid-afternoon we were conventional tourists. First up was Rila monastery. It's reportedly the most visited tourist attractions in Bulgaria and is claimed to be one of the finest painted monasteries in the world. We were impressed. It's everything the hype suggests. It was also extremely busy with tourists from innumerable nations. We even saw a UK-registered car there.
As a bonus we saw alpine swifts nesting in the bell tower. I'm not sure how this would fit with the deeply religious amongst the Eastern Orthodox community but we, at least, thought it entirely appropriate.
Having quit the site we headed for another Bulgaria banner-attraction in the form of the Stob Pyramids. En-route, we stopped at a roadside vendor's stall and Emma bought some honey from the stall holder who was probably in his 80s; and who boasted the provenance of his wares in the form of a substantial array of beehives directly next to the stall. It just felt good to buy from the guy, even if he was a bit shrewd and slightly inflated his prices to accommodate the transaction in Euros rather than Bulgarian Lev... of which we have none.
The currency issue came into play again half an hour later when we stopped off at the Stob Pyramids. These are natural formations of eroded sandstone sometimes creating improbable columns that often feature a larger, more weather-resistent kind of rock forming a 'hat'. The less vulnerable rock, acting as shelter, effectively preventing the friable sandstone immediately beneath it from weathering away.
Anyway, these are perfectly natural formations in the great outdoors so we were somewhat surprised to find a sneaky ticket office and cafe perched at the obvious point of entry. The chap in the office had little English but we communicated that we could only pay by card or in Euro but he communicated back that neither were possible and only Lev would do.
I started thinking how to try to simply yet apologetically explain that because we were just flashing through countries and never ordinarily troubled with such touristy-interactions that exchanging small amounts of currency wasn't - on balance - in our best interest... but could see in his eyes this explanation was going to fall on uninterested ears.
My thought process must have taken longer than I realised and I'm not quite sure if it was pity or boredom that prevailed but his next action let us all off the hook: he simply waved an arm in the direction of the pyramids and said 'Free'. We thanked him profusely and took to the kilometer long climb to enjoy the natural formations some or other enterprise has seen fit to cash in on.
Feeling we'd done enough tourism we returned to the road and headed south towards a couple of pencilled-in nature reserves. Once in the right direction we baled from the busy main road and sought out the overnighting spot we're now at. It's one of those that initially look as if they'll just do the job, but which turn out to be gems. It's just some old  broken road and dirt tracks near a cemetery a little way out of the nearest town. It's also next to a single track railway line that sees the occasional very slow, loco-pulled  passenger train through, reminiscent of trains in England 50 years ago. The whole area looks like it may have seen formal use decades ago, but has long since been left to nature. There's a bit of scrub, some grassland and plenty of fruit trees.
The birdlife is amazing. It's teeming and has returned hoopoe, golden oriole and (a first for us both) middle spotted woodpecker. The surrounding hills also gave up what I think was a lesser spotted eagle.
Even the cemetery is (as they often are) interesting. One convention that's a bit different is that many of the graves sport 'offerings' of things like bottles of pop, dishes and spoons, plates with knives and forks, tins of beer etc. All the graves are well tended and the 'offerings' would appear to be very personalised.
Altogether a splendid little spot that sits completely unassumingly in a random bit of Bulgaria. It would absolutely certainly make no guide book, but it's absolutely the kind of place we do what we do for.