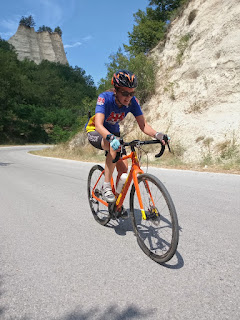 Blogging at 22:30 on Thursday 11th August from intended overnighting spot N 41.51351°, E 23.53188° / http://maps.google.com/maps?q=loc:41.51351%2C23.53188
It's never a chore waking to the melodic fluting tones of golden orioles.
Emma ran first thing this morning whilst I had another session at the utterly impromptu but utterly brilliant birding spot. There were no new oddities but I did see green woodpecker and red-backed shrike to add to the already impressive list.
After quitting our bit of beguiling neglected wasteland we decided to be tourists again and made a visit to a honey-pot community called Melnik. Our Berlitz travel guide informed us this place is best known for being a once-abandoned ancient village, but is also celebrated for its proximity to weird and wonderful sandstone formations, and for the Rozhen monastery about five miles further up the road.
Our take was that the village is far from abandoned now. In fact, it's less abandoned than most other villages we've ever seen. Moreover, its population is artificially boosted by hundreds of tourists wandering seemingly quite vacuously between cafes and tat-shops. In the round, the village is these days probably far less abandoned than most places that are considered desperately overpopulated.
But the sandstone formations and Rozhen monastery were good. We left the truck in Melnik and rode the searingly hot and arduous gradients up to the monastery. In doing so we both served due penance in a way that we hoped the monastery's 'prisoners' might approve, and also saw the best of the sandstone formations; albeit through sweat-soaked eyes whilst rasping at the thin, hot air.
The monastery itself is an impressive structure and gives a sense of walking the tightrope between shameless tourist money-spinner and place of spiritual devotion reasonably well.
From Melnik we took to the very rural roads of southern Bulgaria and in so doing passed through some very nice countryside. By coincidence, we happened upon many a vineyard and the occasional winery. The roads hereabouts were almost deserted and it was great to bumble about at 25mph just being in the moment
One of the moments included a roadside snake. I'm not sure of the species but it was about a metre long, mainly silver, with dark markings along the whole length of its back. Presumably, it felt the lorry approach and, with that, slithered away into the verge.
Tonight's intended overnighting spot was found - as they often are - by following an intuitive random track. It gives great views over a massive panorama and is silent but for cicadas and grasshoppers.
Or at least, it was. We both got out of the truck after dark at about 9.30pm to check locks and such and immediately heard heavy movement in the undergrowth about 25m behind us. That feeling of being watched by something altogether troublesome provided sufficient motivation to climb straight back in and to secure the truck from the relative safety of the escape hatch / roof.
From the crashing and distinct nostril-sounding exhalation we subsequently heard, we're pretty sure we were, and probably still are, again in the immediate presence of wild boar.
Sent from my mobile device
Posted on: Friday, August 12, 2022