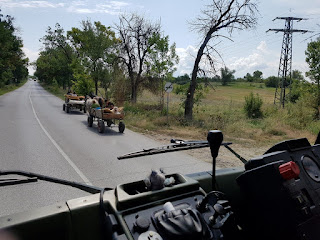 Blogging at 22:00 on Friday 12th August from intended overnighting spot N 42.03269°, E 24.34855° / http://maps.google.com/maps?q=loc:42.03269%2C24.34855
I'm pleased to report there were no more potentially troublesome wild boar encounters last night.
Fair to say that though last night's spot was fantastic for landscapes, tranquility and solitude, it didn't produce that much in the way of birdlife. However, this morning saw a transformation: it was absolutely heaving. We again scored middle spotted woodpecker, red-backed shrike, and - in addition to a wealth of more common species - also saw lesser whitethroat, plus another first for us both in the form of sombre tits. There was also a flypast by a raptor about goshawk size but we couldn't ID it.
We had to cover a bit of ground today but it didn't really work out so well. The main reason for this is that the terrain we've encountered has been consistently mountainous and, in all honesty, in the many hours we've driven today I don't think we've had top gear engaged for more than a total of ten minutes. It's been hour after hour of brutal ascent and even more brutal descent; plus, progress has also been slowed by the state of some of the roads.
Indeed, today's drive through the south and then up towards the central parts of the country has seen a change in apparent wealth. Today had been a lot like driving through parts of Romania. Some of the towns and villages especially have been fairly obviously pretty deprived and we've also seen quite a lot of Romany gypsies doing their superstitious best to repel the evil eye whilst plying back and forth in their unmistakeable way (pic).
As we started to head north and towards the centre of Bulgaria, we passed through a series of upland reservoirs and these revealed an unexpected sight. Basically, bits of open land anywhere close to water were rammed with communities of tents, flaky caravans and equally flaky motorhomes; and many of them looked like they were there for the duration. It was a visual catastrophe that also looked like hell to be a part of socially. Goodness knows what the communes were all about but we agreed that we'd drive at least one hour further north than the last enclave we witnessed.
Another peculiarity on today's route has been the provision of roadside picnic areas and drinking water spots. Some of these have been extremely elaborate and consisted of shelters, tables, litter bins, wood burners, play areas, barbecue facilities; and some have even had tables laid and a stock of plastic cutlery and cups. There have been literally dozens of these and sometimes they've been as frequent as three or four per mile. Some have been a bit dishevelled, but some have been very new and clean. Quite who provides these - or why - is totally beyond us.
Altogether, then, it's been an odd day of either going up or coming down (often very) bumpy roads, whilst surrounded by a lot of weird. As a slight aside, we managed to counteract the weird a little just before lunch by taking advantage of a Lidl to restock on things that at least look like things we ordinarily consume.
Tonight's intended overnighting spot is a bit makeshift and is the result of a quick bike recce following too long-a-day's driving. It's completely unprepossessing but has the benefits of being secluded and relatively isolated.
As a point of note, today was the first day in the entire trip that we didn't have the gun hatch off and all cab windows fully open whilst driving. Coming over some of the high ground, we even encountered some rain!
Sent from my mobile device
Posted on: Saturday, August 13, 2022