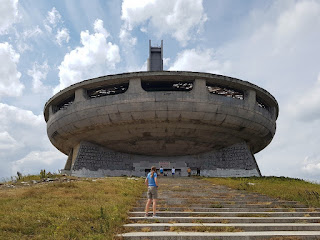 Blogging at 21:30 on Saturday 13th August from intended overnighting spot N 42.74683°, E 25.33468° / http://maps.google.com/maps?q=loc:42.74683%2C25.33468
Last night's 'it'll-do' overnighting spot turned out to be pretty good. After dark, and when the cicadas and grasshoppers got into full swing, it was all quite comforting and pleasant. We also heard an unusual croaking from several points around the clearing we were in and wondered if we'd audibly encountered European tree frogs. They're apparently a feature hereabouts so we may have dropped lucky.
Morning brought a few more croakings and insects to the area and dragonflies especially were pretty well represented. ID is always tricky but I think I saw black-tailed skimmer and black darter. Whilst I wrestled with difficult insect ID, Emma went for a run and (again) simply wrestled with difficult stinging insects. They do seem able to sense the fear...
Today's drive was in sharp contrast to yesterday's in as much as the southern mountains were now behind us and so we made some good progress on largely flat and decently surfaced roads. It was also apparent we'd re-entered an altogether more affluent region of Bulgaria that just looked and felt a whole lot more respected and cared for than the Romania-esque scenes of yesterday.
Our destination goal today has been the Buzludzha Monument, a really bizarre and gargantuan relict of the cold war. En-route to this anachronistic behemoth we fuelled up at the equivalent of £1.41/l and also stopped off at a few war memorial sites and such that caught our eye.
We made the Monument by early afternoon and it really is as left-field as claimed. It's improbably huge, improbably formed, and sits improbably at the very top of the Hadzhi Dimitar mountain (at almost 1500m). In a nutshell it isn't anything other than an utterly bizarre and ostentatious demonstration of cold war chest-beating socialist one-upmanship.
Unfortunately for communism, the monument's utterly dilapidated state is more of a demonstration of how that particular ideology is basically as flawed as the concrete from which the monument was made.*
The monument's dilapidation is a crying shame, really; and it's good to read that at least there are moves to repair and restore the valuable mosaics contained within, and moreover to eventually restore the whole thing (but not the communism bit). It would be fantastic were this ever achieved, it really is quite extraordinary.
After being suitably impressed we made our way off the mountain top and in doing so dropped through some mature beech forest. During the descent Emma saw a sizeable mammal run across the crumbly mountain road some way ahead of us and, though she wasn't 100%, all clues point to beech marten.
Inspired by this, and also by being a bit tired and feeling lazy, we immediately started to look for an overnighting spot and pretty quickly came up with the location we're now at. It's a bit of unmanaged grassland and scrub in a clearing and it's already been a winner. General birdlife here is good but the real headline is that we've had an absolutely excellent and very close-up sighting of a wryneck. It's a first for Emma and only my second ever confirmed sighting. These really are elusive little chaps and it's easy to be within a couple of metres of them and have absolutely no idea. Now, if only a bear or lynx would show up...
Sent from my mobile device
* To head off any angry letters, I'd argue the same is essentially true of capitalism: an equally flawed system requiring an equal number of nuclear missiles, but under which a slightly greater number of lucky people accumulate slightly less personal wealth. And which results in equally poor concrete: but for slightly different reasons.
Posted on: Sunday, August 14, 2022