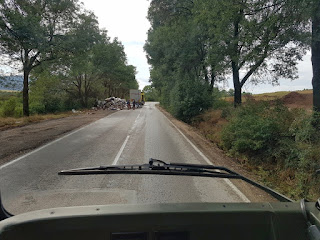 Blogging at 22:00 on Sunday 14th August from intended overnighting spot N 43.71202°, E 22.74132° / http://maps.google.com/maps?q=loc:43.71202%2C22.74132
It's been a big day of driving as we've dawdled a bit in Bulgaria and needed to make up a bit of time. We've covered a lot of ground and have again seen many faces of the country in one day. We've seen affluent areas and excellent roads, and deprived areas and roads that have been truly horrible.
It's also rained pretty heavily today and pretty much all day: a good day to cover some ground, then.
Simplistically, as we headed to the northwest of the country and beyond Sofia, things became altogether less salubrious. Some of the multi-storey housing in some of the towns we passed through was truly dire and the further northwest we travelled the more like Romania things again became.
Much of the latter stages of today's journey were made on Road 1. This was one of the worst roads we've ever used. It's a fast, narrow, mainly single carriageway and - today anyway - was wall-to-wall artics using it as a corridor to the border crossing to Serbia; and in doing so travelling way too quickly on truly horrendous surfaces.
Most of the time in our truck, what with its low power, crude suspension and equally crude chassis, I was just about in control at a maximum of 40mph. Even at this speed the bumpy / tram-lined / simply sometimes-absent metalled surfaces genuinely had us crashing around mercilessly and being pulled left and right by furrows in the tarmac so deep it was sometimes more like surfing than driving.
Once you throw in impatient artic drivers steaming past with their air-sprung, 500bhp+ wonders, things start to get a little stressful. At times it really was white knuckle stuff and it came as no surprise to pass a recently burnt out artic in a roadside ditch, and only a few miles further on, an artic blocking one lane with a fully shed load and the back of the cab smashed in as if the load had gone through the front of the trailer before scattering all over the place (pic).
Compounding the unpleasantness was the sight of some of the remote lay-bys off this road being ostentatiously paraded by ladies of the night. Except it was day, and they didn't appear to be ladies. Even the occasional built up area we passed through offered little respite, there's clearly very little money in the area and some of the housing was just desperate. Think lean-to shelters and corrugated tin roofs. Many of the people just looked haunted and miserable.
Summing up, the whole experience of the last 50 miles or so of today's drive was pretty wretched.
Wildlife viewings up until finding the overnighting spot have been limited but we did see what I think was another lesser spotted eagle and at one stage a small mammal scurried across the road in front of us that we think may have been a Eurasian hamster. They're apparently reasonably common in Bulgaria and also have pockets of population in Belgium and the Alsace. Who knew?
The intended overnighting spot is a dead end track that looks like it might have been widened and 'improved' to allow construction traffic to the site of a new motorway build project (genuinely needed, for once). It's just a plain old track through agricultural land and at first glance looks very, very ordinary. But... in finding this spot we've discovered why turtle doves are so tricky to spot throughout Europe these days: they're all here. There are dozens: it's bonkers. Not only that but the spot we've selected overlooks a bit of scrub and the birdlife has been amazing.
Bee-eaters have been doing their thing over an adjacent sunflower field whilst the track and scrub have produced a huge species list with everything from tree sparrows to another new bird for me in the form of ortolan bunting. The couple of hours spent with bins and scope on the top of the cab were just the thing to save the day. Oh, and beer.
Sent from my mobile device
Posted on: Monday, August 15, 2022