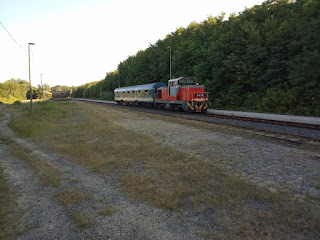 Blogging at 21:30 on Wednesday 17th August from intended overnighting spot N 46.51672°, E 17.65658° / http://maps.google.com/maps?q=loc:46.51672%2C17.65658
Thankfully, nothing woke us up last night and, come this morning, Emma ran around random farm tracks on foreign soil for no other reason than to do that. Some normality had returned.
After getting under way we were pretty quickly at the Serbia / Hungary border where the surly Serbian immigration officer again fastidiously searched for Kosovan stamps before releasing us to the smiley Hungarian immigration officer who clearly couldn't care less if we'd been to Kosovo or not.
For the first time ever at a border, the Hungarians also wanted to see my driving licence. Thereafter all was pretty perfunctory and once they'd accepted Emma's entirely true declaration of no cigarettes and entirely false declaration of no alcohol, we were officially back in the EU.
We like Hungary a great deal. We've only ever met with friendliness here and it's a gem of a country. We've been to it and through it several times now and every part of it has been great. Today's drive to where we are now did absolutely nothing to alter our views.
We've had several thumbs up for the truck, civic pride is excellent, driving is generally calm, the countryside is sublime, and it's altogether no bad place to be. There's a quiet dignity to the country and it's a place where fresh bin liners in frequently emptied public rubbish bins are the norm.
It felt good to be back and we bumbled extra slowly.
Tonight's intended overnighting spot is a track beyond a rural train station. We've had decent returns from such sites before in Hungary so we're giving it a go. Apart from anything, the rural trains are often a bit different. The one in the pic was a very old diesel loco that looked like it had probably been made for some specialist job originally, but which was now pulling just one solitary passenger car. It seemed happy enough, if not quite able to believe its luck.
The spot is within easy walking distance of some open water habitat that's clearly used as a well-stocked fishery. I saw countless large fish topping and breaching there and this went a long way to explaining the subsequent osprey sighting, which I didn't take for granted. Also on the open water were a pair of ferruginous ducks: another joyous first for me! Arriving back at the truck, a young roe deer also appeared just in front of where we'd parked and wandered casually over the railway lines. All was well.
Except, not long after getting back to the truck a guy turned up in a car and drove up the track towards the wetlands. We exchanged waves but not long after this I heard the telltale sound of a duck decoy. Sure enough, for the last hour of daylight we were regaled with sporadic shotgun fire.
Which also set off some yapping dogs in neighbourhoods completely hidden from our view but, unquestionably, well within earshot.
Brilliant. I'll spare you my more considered thoughts on the gun bearer but they were - by some distance - a long way short of charitable.
We shouldn't moan, though, because I'm pretty sure that in the original draft of Job 1:21 we were unequivocally warned that: The Lord of rough camping giveth: the Lord of rough camping taketh away.
Sent from my mobile device
Posted on: Thursday, August 18, 2022