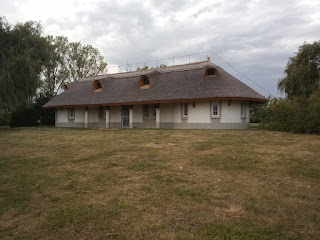 Blogging at 22:00 on Thursday 18th August from intended overnighting spot N 47.71519°, E 16.66456° / http://maps.google.com/maps?q=loc:47.71519%2C16.66456
Because we like Hungary we continued to bumble extremely slowly on small roads in a pretty random northerly direction and just casually enjoyed the pleasant villages and general countryside as we went. It's been an unspectacular but fulfilling day, even if it has been rather too hot... again.
We both biked this afternoon from the intended overnighting spot we're now at and made the most of some excellent cycleways that run through vineyards here, as well as woodland and open country. For sure, this is no bad place just to be.
From the intended overnighting spot I've seen honey buzzards, marsh harrier, great white egret, roe deer and a couple of brown hares. Probably the best sighting was of a water rail poking around in a small ford right near where we're parked. A bit like wrynecks, these are hard to see: especially fully in the open.
Emma went one better and spotted a small (about 30cm) snake swimming in the same unassuming water body, presumably on the hunt for the many frogs that also seem to call the ford home.
Also close by is a water treatment plant. The pic is of the office / control room that the site's operated from and just gives a sense of how the Hungarians can even do sewerage in an inoffensive kind of way.
We'll be leaving the country first thing in the morning and it'll be regrettable to have driven slowly through quite so quickly. The only thing that consistently detracts from Hungary generally is the number of shooting platforms that bespoil the countryside.
Like it isn't already tough enough for wildlife to make it from one day to the next...
Sent from my mobile device
Posted on: Friday, August 19, 2022