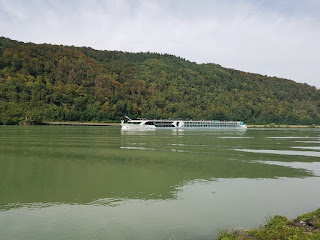 Blogging at 22:30 on Friday 19th August from intended overnighting spot N 48.27643°, E 14.38962° / http://maps.google.com/maps?q=loc:48.27643%2C14.38962
Ahhh, Austria.
We were well aware we'd crossed the border due to the sheer number of signs making everything verboten, everywhere... all of the time.
We were also well aware we'd crossed the border because everything looked like a painting, again everywhere, and again all of the time.
It's at once perplexing and massively impressive how every house, every field, every town, every tree, every bridge every factory (you get the idea) is always immaculately presented and maintained. It's clearly a hugely cultural state of affairs and possibly influenced by deeply bureaucratic and punitive enforcement, but the result is undeniably impressive and dramatic.
We've consistently found Austria to be singularly immaculate and deeply beautiful. The landscapes are chocolate box; even the rubbish ones, and no matter where you look there's a sense of order and pride.
They're just on top of stuff here, and this was evidenced by an incident we witnessed only one hour into the country.
We were driving along quite a fast trunk road when we saw blue lights flashing on a fire tender blocking one carriageway. As we got closer we saw two other smaller fire-brigade vehicles also in attendance, again with blue lights flashing. I slowed on approach and could see one officer directing traffic whilst about eight others were tending the deployed hose and the scene in general.
We anticipated some sort of car crash but as we drew level saw the reason for the commotion.
Two lads of about 12 had started what looked like a small camp fire in a verdant field just off the road and - judging by their low-hung heads - were having a strip torn off them by one of the fire officers. The fire had been very much more than fully extinguished, and it looked like all that remained to be done was to immediately erect a beautiful sign clearly verbotening 12-year-olds from having camp fires in that particular field from this point forward.
We mock, but really we're jealous. The sense of order and organisation is both laudable and enviable.
We've again intentionally stuck to back roads today as this both allows a better view of the country and circumvents the highly punitive vignette and toll systems that operate here. The resulting drive has been slow but tremendously rewarding. One of the high points was driving alongside the Danube at a pace only slightly greater than one of the mighty cruise vessels that ply these waters (pic). It was a splendid scene in its own right but it was also a nostalgic reminder that only a few days ago we were alongside the very same river but hundreds of miles further south in Serbia. Travelling makes life last longer.
Tonight's intended overnighting spot is a few miles south of Linz where we've aimed for on purpose as tomorrow is parkrun day and a relatively new one has started here that - by happy coincidence - also heavily features some cycle and walking paths alongside the Danube.
There's nothing particularly special about the intended overnighting spot other than it's hidden. This is important in Austria where there's most certainly a place for everything and everything must be in that place. Including gringos' reisemobils.
The spot is a bit of an odd one, too. It's very densely vegetated and includes lots of swampy areas. There's just been a thunderstorm and now the mists are swirling it has the appearance of a (very well ordered) rain forest. Also, for the second night running I've again spotted a water rail out in the open in one of the swamps, but this one also had a chick in tow and was making many of the pig-like whistles and squeals they're noted for. The chances of this second sighting in a completely different country are unfathomable.
Sent from my mobile device
Posted on: Saturday, August 20, 2022