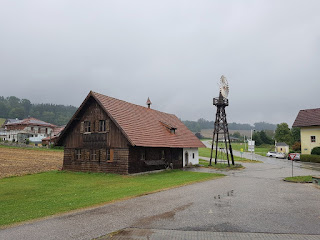 Blogging at 22:15 on Saturday 20th August from intended overnighting spot N 48.25866°, E 12.76500° / http://maps.google.com/maps?q=loc:48.25866%2C12.76500
We made the parkrun and it was a splendid experience. In spite of being right in the centre of Linz access wasn't too bad and we even found somewhere to park right near the start of the run.
The area around the start is a full-on and entirely free recreation area that, amongst other things, comprises an outdoor gym, five-a-side pitches, basketball courts, a skate park and various picnic areas. All was beautifully maintained and even at the parkrun-hour of 9.00am there were dozens of people about engaged in all sorts of pursuits. They were of all ages, too. It was grand to see.
Whilst warming up for the run I went beneath a huge bridge over the Danube that had largely been Heras-fenced off whilst some bridge maintenance was being done. There, and somewhat to my surprise, I chanced upon a few people sleeping rough, but here's the noteworthy bit: even these chaps seemed very well organised and unobtrusive. There was no litter and all seemed calm and dignified. Each rough sleeper had a neat and tidy 'plot' and, nearby, there were a couple of portaloos set up. There are probably worse places to be a hobo than Austria.
The parkrun itself was a low-key and friendly affair. We met the organiser before the event and learned he had only started it in April this year and was happy to continue until it gained traction. It's one of only three currently being run in Austria and the concept is still all rather new here. He was delighted we'd intentionally made the effort to visit and  participate and we were equally delighted that we'd supported the event. The course itself was flat and fast and there was lots of communal support between all competitors. This event is totally worth supporting.
From Linz we headed west and into a serious change in weather. The default for this entire trip has been (almost) incessant beating sunshine and uncomfortably high temperatures - 24 hours a day.
Not today. It's rained... a lot (pic). For the first time on the trip at overnighting-spot time I haven't had the choice to climb onto the cab-top seat to watch the world but have, instead, had to wonder around the general area trying to keep the worst of the rain off the bins. It's been good, though, with a pair of golden orioles and some genuinely beautiful beautiful demoiselles being the most showy sightings. One of the male demoiselles in particular was so outrageously iridescent it looked like it was battery powered.
Sent from my mobile device
Posted on: Sunday, August 21, 2022