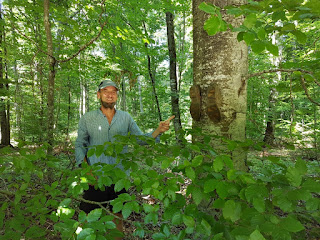 Blogging at 22:00 on Wednesday 24th August from intended overnighting spot N 49.00948°, E 05.60008° / http://maps.google.com/maps?q=loc:49.00948%2C05.60008
Shortly after going to bed last night - and (according to Emma-the-sleepless) thereafter throughout the night - there were lots of movements through the forest around us. Whatever it was apparently sounded quite heavy, but also careful and slow. In the cold light of day we suspect roe deer.
Following the night of general terror, it's been another day of casual and fairly aimless bumbling that saw us quite by chance passing through a concentration of WWI and II military cemetery sites. We saw entire cemeteries dedicated to Germans, Americans, and one huge site for (mainly) French people near the town of Montauville. This site was so compellingly vast that we took the time to have a proper look around. It contains the remains of more than 13,000 people and the headstones and crosses literally stretched away up a hill as far as the eye could see.
The American cemetery a few kilometres away from the town was also large and was noteworthy for the exceptional level of presentation and scrupulous maintenance. Like the American cemeteries we've visited in Normandy, it's obvious that genuinely remembering and respecting those killed in conflict is something taken very seriously by the USA; and credit to them for the gravitas.
On a more detached note, I suspect that addressing the travesty of the number of US citizens murdered by other US citizens in the USA this year alone far outweighing the number of dead in this immaculate cemetery is beyond the remit of those responsible for the exemplary grass-mowing regime. It's a shame; as, judging by the grass, they'd very probably have the wherewithal to stop selling assault weapons to sultry teenagers without much further ado.
To lighten the mood a little we headed west and paid homage to Jesus's sandals. We first chanced upon them in (I think) 2009 and thanks to what can only reasonably be explained by divine will, they remain in-situ (pic).
Not far from where Jesus chose to proceed barefoot we decided to call it a day and found a quiet bit of forest clearing to overnight. There wasn't much wildlife about but it did (eventually) give up some typical woodland birds with the highlight being middle-spotted woodpecker.
From here I had a spin out in the bike and - in that way that happens - inadvertently discovered a wealth of history that would be so easy to simply flash past in a car (or slow old lorry).
This particular easily-overlookable history was about the establishment of German troops in these very forests during WWI and the fate of a French author and soldier called Alain Fourniere. French literary classics are not in my radar but it's clear this chap was a significant figure. He was killed not far from where we are along with some comrades and, as a tribute, almost half a kilometre away from the road, in quite deep forest, is a stone sculpture and a significant glass pyramid containing memorial stones to those killed there.
Also around and about are several headstones marking German soldiers who also perished in this random bit of France.
Bumbling can be humbling.
Sent from my mobile device
Posted on: Thursday, August 25, 2022