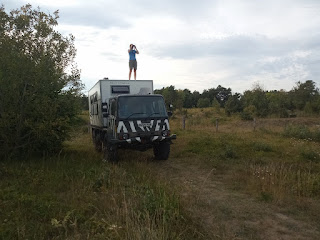 Blogging at 21:30 on Thursday 25th August from intended overnighting spot N 49.47541°, E 03.71998° / http://maps.google.com/maps?q=loc:49.47541%2C03.71998
It's been another steady day today with the only real obvective being to make some ground back towards Calais. During the ground-making, and purely as matter of general interest, we happened to see 4000 miles click over on the odometer.
We've again used smaller / quieter roads and again passed countless military memorial sites and cemeteries. It's almost impossible to envisage what these landscapes must have looked like during the great wars: WWI in particular.
Tonight's intended overnighting spot (pic) is one we've used before and is an area comprising small yet highly pronounced chalky hillocks with short, sparce vegetation and the occasional bit of scrub including bramble, birch and juniper. It's managed for (and is excellent for) butterflies and - unusually for France - there's a waymarked trail through the hillocks with information panels dotted about.
Of the species we've seen (and could ID) there's been: large white, clouded yellow, brimstone, common blue, large blue, chalk hill blue, swallowtail; plus a few restless fritillary species that never settled so defied even a stab at ID.
As well as the butterflies there are countless other insects around that I personally can't even tie down to even a broad taxonomic group.
Birds feature well here, too and apart from the more expected stuff it was good to see a crested tit flitting and feeding alongside a flock of its long-tailed relatives.
Sent from my mobile device
Posted on: Friday, August 26, 2022