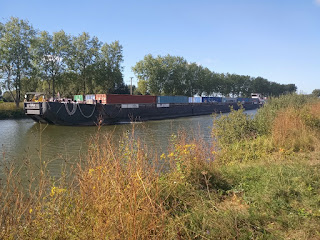 Blogging at 21:45 on Friday 26th August from intended overnighting spot N 50.93504°, E 02.26102° / http://maps.google.com/maps?q=loc:50.93504%2C02.26102
Well, we're into the final throes of the trip with today constituting the final bumble up to our current intended overnighting spot: our most regular staging post for Calais.
The drive was pleasant enough, if unspectacular, and featured only a couple of the daily French 'Route Barrées', which again saw us burning more diesel than we'd prefer whilst simultaneously finding ourseves in some much tighter spots than any self respecting small lorry should be found. The barrées resulted in - as they reliably do - some bad swear words.
The journey did also throw up an unusual sighting-whilst-driving in the form of a polecat; bounding seemingly quite aimlessly in a tilled field at the side of the road.
The intended overnighting spot has served us well over the years and is yet another decent place to casually watch barges, whilst equally casually scanning for wildlife. A tug pushing pans (pic) and marsh harriers were the best of both.
For part of the time, Emma watched both things rather less than casually by going for the last run of the trip down the towpath.
It's an early start tomorrow as we're still a slack hour from Calais (so hopefully beyond the prospective clandestine stowaway zone) and have to check in at the port by 7.00am. Furthermore, and rather troublingly, about an hour ago we had a text saying customs and immigration delays are expected at the port. It seems the French are blaming the English and the English are blaming the Channel Tunnel. For its part, the Channel Tunnel seems to hold no views but, in fairness, is permanently distracted with the nagging self-doubt about the logic of its own existence.