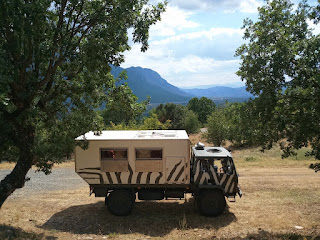 Poachers. You gotta love 'em.
At about 23:20 last night we were awoken by a car driving past the truck and on down the canal towpath. Given motor vehicles are interdit on the towpath here this all seemed a bit odd: but then we're not exactly unfamiliar with odd nocturnal happenings and the drive-by was initially written off as a simple nuisance.
About half an hour later we were awoken again... but this time by two shotgun blasts, one immediately after the other. Though not nearly as sketchy as the Serbian shooting incident, the shots were still too close for comfort and - just as sketchily as the Serbian incident - were pretty obviously orchestrated by some tosspot(s) with little regard for common human decency. Furthermore, the circumstances betrayed that it seemed unlikely the tosspot(s) in question had bothered with an appropriate health-and-safety risk assessment.
And so, at about midnight, and for the second time on this trip, we decanted to the cab with armed hostiles in the vicinity and scooted sleepily to a random bit of rough ground on a random lane a random number of kilometres away from the tosspot(s).
Just what you need when you have to be up at around 05:15 to make a ferry.
Anyway, at around 05:15 we did indeed grumpily drag ourselves out of bed, swore a bit, wished pernicious ills on poachers the world over, drank coffee, and then headed off to Calais. In spite of the warnings of potential delays all went OK but it was certainly the case that the French whizzed us through their border checks with absolutely zero friction whilst the British process was most definitely resulting in some pretty long queues. Given that this was an early sailing, it seemed reasonable to assume that later crossings may well indeed be snaggy and the portents of miles of tailbacks and several-hour delays seemed perfectly possible. Once again, it seems, the UK is currently all a bit wobbly: which is really hard to fathom given the sublime quality of political leadership over these past few years.
Anyway (again), the channel crossing to the point of mapping the coordinates shown has been very smooth and for the first time ever on a Dover-Calais service we've seen cetaceans in the form of both porpoises and dolphins. This was a good way to end a good trip: especially as a bad end to a good trip was - for a while - looking more likely (in the form of being shot / delayed / both).
So, that's about it. This is the 11th consecutive year we've spent a decent chunk of time away in the truck and it's once again provided the most excellent and loyal service. By the time we get home we'll have clocked as near as makes no difference to 4,500 miles. Our total trip miles in the truck are now around 56,000 and at some point I might even check the oil. It regularly gets us to some really excellent spots and just plain competently supports the kind of things we like to do. It's sometimes almost as if it were designed just for us. Chapeau to the truck.
We were thinking of quickly summarising each of the countries we've visited on this trip in this final post but then saw dolphins and - in any event - find ourselves in rare agreement in concluding that I've already banged on quite enough.
Suffice to say that we've had some excellent times and none of the Eastern Balkan countries we visited resulted in any regrets. Outside of the Eastern Balkans, Greece was very definitely most enchanting and alluring and is absolutely on the cards for a deeper delve. We won't be going through southern Italy to get there, though.
Sent from my mobile device
Posted on: Sunday, August 28, 2022