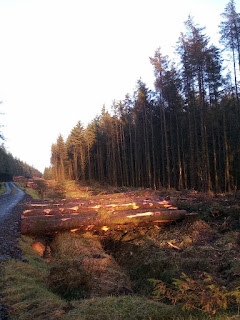 Blogging at 21:00 on Thursday 29th December from intended overnighting spot N 55.05314°, W 06.19657° / http://maps.google.com/maps?q=loc:55.05314%2C-06.19657
We decided to have a really steady day today and have covered very little ground. We started by having another extended scan out over the sea around the Ballycastle and Rathlin Island areas, but there wasn't much moving at all.
Last time we were in Ireland we drove through and enjoyed the Slieveanorra mountains, so decided to revisit and spend a bit more time there. On arrival, we initially had a bit of an explore-by-truck but by lunchtime were pretty much settled for the day.
Since then, we've once again endured all manner of weather from full-on snowfall to crisp and clear skies. We've both had a run and a general bumble about with the bins but, pretty much like Ballycastle, there's not been much out-and-about. Ravens and coal tits have been the only consistent protagonists.
In spite of the lack of birdlife, we have been treated to some pretty spectacular late-afternoon light and, were either of us able to take decent photos, would have been able to post an image that showed some freshly deforested pines fancifully looking as if they were glowing on fire.
Notwithstanding the thin pickings sightings-wise, this is for sure a sparsely populated and splendidly remote area: so works for us.
On the downside, and this is pretty atypical in our experience of Ireland in general, the amount of roadside rubbish in the area is utterly disappointing: especially as these are almost deserted mountain roads. It's not England-bad, but it's not far short. Notably, Red Bull tins feature particularly heavily and quite what might be going on there is anyone's guess.
Up here it's not so much that the drink 'Gives You Wings': it's more that it 'Makes You Despair at Humanity'.
I might write to the company and invite them to use my factually more accurate strap line.
Sent from my mobile device
Posted on: Friday, December 30, 2022