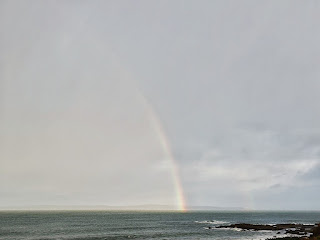 Blogging at 20:30 on Wednesday 28th December from intended overnighting spot N 55.20818°, W 06.20808° / http://maps.google.com/maps?q=loc:55.20818%2C-06.20808
At about 02:15 this morning we were awoken by a highly-revving engine and a pathetic attempt at a wheelspin.
Yoof had appeared in the Fort Dunree car park about a hundred metres from where we were kipping. The 'wheelspinning' didn't go on very long but was soon replaced by the kind of raucous yet utterly vacuous laughter only teenagers are capable of. The enemy was quickly identified as one male and two females. They decanted from their low-powered but impressively noisy steed and then spent about half an hour wandering around the extensive Fort Dunree site, whilst all the time finding something or other to be very loud about.
They didn't come anywhere near us, nor did they seem even slightly interested in our presence, but for half an hour - in the arse end of nowhere - our various worlds mildly collided.
Possibly responding to a call from destiny to fishtail an underpowered car into a random ditch, they ultimately left the site and freed us to return to the important business of sleep. Irritatingly, just as that quest was working out, we were then disturbed again by what we believe was a Garda car snooping about on the now-cold raucous-teenager trail.
Bottom line: that's an overnighting spot now deleted from our database, but such is the jeopardy when overnighting off formal sites.
It's a shame, too, because come daylight the birdlife around and about was splendid with the massive if very rainy views over Lough Swilly throwing up black-throated divers, a guillemot, several gannets, a peregrine and a handful of fulmars, as well as the more expected gulls and cormorants etc.
The subsequent day's drive saw us taking advantage of diesel at the equivalent of £1.39/l before leaving the Republic and returning to UK soil. Very Irish UK soil, that is.
Ongoing incessant rain accompanied us across NI's northern coastline but that didn't stop us making an effort to visit a few very attractive harbours and such as we pootled generally eastwards. Ballintoy harbour in particular is pretty much as chocolate-box quaint as it's possible to be.
As we made our quick visit there it was painfully obvious that tourist traffic is just absolutely omnipresent and - as is the way with honeypots the world over - tourism must really impact on the tiny community that calls the place home. We concluded that notwithstanding the sublime beauty, living there - for us, anyway - would be absolutely dreadful.
Our bumble east eventually led us to Ballycastle and to a place we've stayed at before that overlooks the bay to Rathlin Island (pic). When we were last here we saw a minke whales as well as dozens of dolphins. This time things are much quieter, though we have had the pleasure of the company of numerous common seals.
Predictably, Emma Gump ran yet again and has now probably clocked more trip mileage than the truck itself.
Sent from my mobile device
Posted on: Friday, December 30, 2022