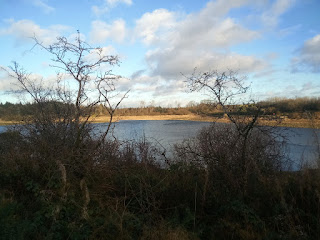 Blogging at 21:15 on Friday 30th December from Intended overnighting spot N 54.75896°, W 05.80030° / http://maps.google.com/maps?q=loc:54.75896%2C-05.80030
We had it pretty wild on the mountain last night amongst the discarded Red Bull tins with incessant heavy rain and the occasional out-of-nothing hoolie that literally shook the truck. Such was the ferocity of some of the spontaneous gales that as they ripped through the pines the noise was more like military aircraft than anything.
Come morning, we descended from the tops and found that many of the country roads had become impromptu rivers. We also noted that the owners of a few properties had sandbagged their drive entrances.
The day's drive was again a fairly short and steady affair mainly down the coast road that hugs the beautiful northeast coast of the country. The drive was dictated to some degree by the need to be somewhere just north of Belfast by tomorrow morning as we have yet another date with a parkrun and (too soon afterwards for comfort) the Stena Line ferry back to Scotland.
Speaking of Scotland, as we drove the coast road the Mull of Kintyre and various offshore islands were clearly visible and we stopped off three times at roadside lay-byes just to gaze out with the bins to make the most of the compelling vistas.
Come lunch we were close enough to Belfast to winkle out an overnight spot and initially had a bit of a pootle around the Woodburn forest and reservoirs area. Though the countryside itself was pleasant enough, the area was rather too littered and peopled for our tastes, so we had a root about a bit further east and nosed out our Intended overnighting spot of Lough Mourne Reservoir, instead (pic).
This, up to the time of writing anyway, has proved to be something of a gem; notwithstanding its proximity to some pretty significant areas of population.
It's quiet, secluded and it seems visitors are more than happy to put their rubbish in the litter bins provided rather than toss it casually aside as seems to be the norm just a few miles west. Incidentally, some of the more disagreeable rubbish around the Woodburn forest area indicated that a good number of car park users were probably not practising Catholics.
I had a wonder around the Lough Mourne reservoir with my bins for an hour during the late afternoon and was surprised to rack up a bird species list approaching 40. The mosaic of open water, freshwater marginal and mixed mature woodland habitats no doubt helped, but it was an impressive one-hour count by any standards.
Most notable sightings were crossbills, redpolls, bullfinches and what I would swear was a willow or marsh tit, but for the fact my birding software would seem to indicate they aren't supposed to be found in Ireland.
Anyway, false-sightings or not, this is a pretty cool spot that punches a weight above many a formally notified nature reserves.
Sent from my mobile device
Posted on: Saturday, December 31, 2022