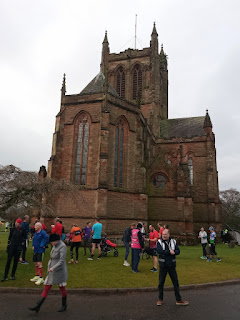 Blogging at 20:00 on Saturday 31st December from intended overnighting spot N 55.01490°, W 03.62432° / http://maps.google.com/maps?q=loc:55.01490%2C-03.62432
The Valley parkrun at Newtonabbey was another bitterly cold affair but that didn't stop the faster people there going at it in shorts and T-shirts. They're tough in NI.
As predicted, it was a full-on dash after finishing the run in order to make the ferry check-in, but we prevailed. For dramatic effect it would have been good to report that - having had literally no time to change - we checked in looking all purposeful whilst still wearing our trained-athlete-looking running gear. However the actual truth is that we checked in numbly and meekly whilst shivering in what is by now thoroughly disheveled, and possibly even quite offensive, running gear.
By good fortune we were one of the first vehicles waved onto the ferry so made a beeline for the restaurant before the hordes amassed to replace far more calories than we'd burned during the parkrun with ship-chips. They were especially good, almost flash-fried good... so we had some more.
The crossing was smooth and without incident and by early afternoon we were splooshing through a particularly wet and grey Dumfries and Galloway. We'd seen weather warnings for floods and they were pretty well justified. Gulls and geese were picking over fields whilst the sheep that should have been there we're hunkered despondently in the lee of hedgerows and walls.
The spot we're now at is a splendid nature reserve that we've visited a few times before. Unfortunately it was too dark to have a walk around by the time we arrived and, even more unfortunately, we'll have to be gone before day breaks in the morning.
Tiresomely (both metaphorically and actually) we're yet again destined for a parkrun in Dumfries at 9.30am tomorrow morning. This will, of course, be the fourth of this short trip. It's only been possible to achieve this number because the organising body sanctions 'special events' to be run on Christmas and New Year's Day. Once Emma realised the possibility of doing four in nine days, in three different countries, this trip was only ever going to end one way.
I'm still not sure why I've joined in with the folly and actually run the things, though.
Sent from my mobile device
Posted on: Sunday, January 01, 2023