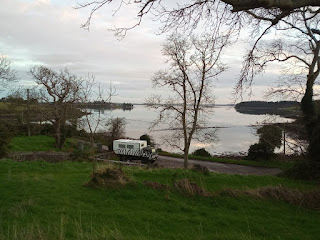 Blogging at 21:00 on Wednesday 21st December from intended overnighting spot N 54.49911°, W 05.64701° / http://maps.google.com/maps?q=loc:54.49911%2C-05.64701
The dark skies camp last night lived up to its billing, with brilliant naked-eye views of the Milky Way. It was also gratifyingly isolated and bleak.
This morning's trip to Cairnryan was uneventful apart from an unwelcome interjection courtesy of Barclays PLC, who decided that an hour before we were due to set off on a ferry to Ireland would be a good time to text me to let me know - in full seasonal spirit - that they'd blocked my debit card.
Suffice to say that whilst trying to juggle the officialdom of checking in to the Stena Line ferry - and dealing with the inevitable (for us) contraband searches - I had to wait in several of Barclay's tormentingly patronising telephone queues until an actual human (who still sounded a bit like a patronising queue) purportedly reinstated the card that the bank had arbitrarily blocked for seemingly no more reason than an algorithm had instructed that it should be so following a failure of their own software last Sunday.
A lot of swearing happened.
The Irish Sea crossing itself was pleasingly unremarkable and because COVID 19 has now largely been replaced by a much less troublesome failure of almost all of the UK's infrastructure; plus a cost of living crisis tacked on for good measure, we were allowed by both law and Emma - for the first time since 2019 - to visit some of the ship's communal areas in order to procure and eat ship-chips. Thankfully, no one was on strike, chip-dependant supplies had made it to the ship, and we could (just about) still afford them.
The ship's final approach to Belfast saw us passing through huge flocks of seaborne eider ducks and these helped with the gathering feeling that notwithstanding VDO Speedos, Barclays PLC, a crumbling homeland and ship-chips as expensive as the actual crossing itself, things were looking generally OK.
From the port of Belfast we had a steady trundle southeastward, which coincidentally took us past the impressive facade of Stormont, where the NI Assembly still doesn't sit but instead extremely conscientiously continues to bicker over who's to blame for the fact that it shouldn't even attempt to run the country.
Running short of daylight, the post-Stormont trundle took us a few more miles to the west bank of Strangford Lough where we're now hunkered and intending to overnight (pic). It's an interesting spot because as well as excellent views of masses of birdlife on and over the Lough, we're also adjacent to a couple of sites of cultural interest, including some ruins of a small castle and a historic monastic site.
We hope to have a better look at these in the morning.
Sent from my mobile device
Posted on: Friday, December 23, 2022