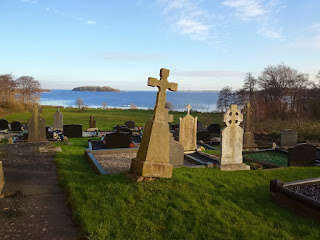 Blogging at 20:30 on Thursday 22nd December from intended overnighting spot N 54.72482°, W 06.90764° / http://maps.google.com/maps?q=loc:54.72482%2C-06.90764
As intended, we checked out the cultural attractions mentioned yesterday. We now know these to be Mahee Castle and the Nendrum Monastic Site, and both are worth a visit. The monastic site in particular captured our imagination because as well as some well presented information and well preserved artefacts it boasts the first-known tide-mill, where a still-visible dam trapped high-tide waters, which were then released through a channel that powered a grindstone. Good thinking, those monks.
The lough again proved good for birds, the more notables being knot, black-tailed godwit and brent geese.
After breaking camp we had a steady pootle to Maghery Country Park at the southern side of the massive and sea-like Lough Neagh (pic). It's a place we've called off at before and found both pleasant and interesting. Here we did lunch, had a run, did a bit of birding and had a general wander about. It's a generally benign and agreeable area (if you're prepared to overlook more than a little gratuitous habitat destruction as a result of commercial peat winning), and gave up such diverse species as goldcrest, siskin, whooper swan and raven.
Post lunch we bumbled down mainly rural roads in the direction of the OM Dark Sky Park, an area commended by a trusted source. On the way we chanced upon and called in to a megalithic site known as the Beaghmore stone formations. It wasn't big or ostentatious but in some ways that made its impact all the more impressive. We both really liked the fact that in spite of the undoubted advances in science and human knowledge that there is an admission in the information panels on this site that no one really has the slightest clue what the formations are all about.
The OM Dark Sky Park proper stands out starkly from the surrounding gentle agricultural landscapes. Though rising hardly a hundred metres above the nicely-hedged fieldscapes, it manages to feel desolate, moody and more than a little eerie. The park is home to a famed observatory, which is itself surrounded by all manner of tourist trails and interactive walks. For the record, it's apparently the 78th area in the world to be accredited as an International Dark Sky Park.
We're hunkered down a little way from the observatory overlooking a small pond and some clearfell within vast pine plantations. There's not a lot moving about but ravens and crossbills have featured. Even here there are more stone formations and though some are identified with little information plaques they remain unexcavated and barely visible through the blanket bog and pine stumps. The word of the day is palimpsest.
Come the night, it really is remarkably dark and incredibly quiet. There's a real sense that the landscape is actually watching us. The second word of the day is spooky.
Sent from my mobile device
Posted on: Friday, December 23, 2022