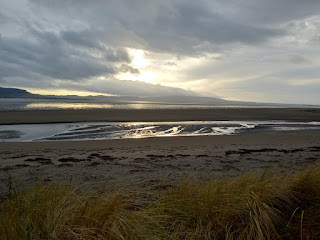 Blogging at 20:30 on Saturday 24th December from intended overnighting spot N 54.34422°, W 08.57609° / http://maps.google.com/maps?q=loc:54.34422%2C-08.57609
Enniskillen parkrun was a tough-but-enjoyable experience. It included quite a few tricky switchbacks and difficult underfoot conditions; it was also very cold. Cold in a sleety kind of way. Notwithstanding, quite a lot of people sniffed at the challenges and some were even crazy enough to take part in the free community event wearing no more  than singlets and shorts. I imagine the French authorities would have been horrified at such wanton wholesale recklessness. And the many pairs of blotchy purple legs.
After the parkrun (where everyone survived and no lawsuits were launched) we headed for Cavan Burren Park, a really nice upland area featuring karst landscapes, extensive untrammeled habitat and lots of interesting ancient megalithic features. Though it's pretty clearly a place well set up for tourism, today, at least, we had the place to ourselves and enjoyed an hour's mooch around; we even had the pleasure of sighting of a few redpolls.
From there we pootled towards Sligo, enjoying the mightily impressive Devil's Chimney waterfall at Glencar Lough as we passed. We pootled Sligowards because the organisers of the parkrun there have been kind enough to put on a Christmas Day event and Emma was of the very strong belief that notwithstanding today's Enniskillen efforts, it's incumbent upon us to support such a noble cause.
I'm personally not so convinced that Jesus would appreciate such distractions from his birthday celebrations and would feel far more comfortable following his more orthodox teachings of spending, eating and drinking far too much; before drunkenly upsetting distant relatives whilst wearing a crepe paper crown.
That said, Jesus does seem to be quite a forgiving sort and so we find ourselves, for the second consecutive evening, geographically situated in a state of parkrun preparedness.
From the intended overnighting spot (pic) I've had a decent wander around with the bins and though no rarities have cropped up it's been the usual humbling pleasure to watch stuff like black-tailed godwits, brent geese and redshanks eking out their hard-won day of simple survival. None we wearing crepe paper crowns.
Sent from my mobile device
Posted on: Sunday, December 25, 2022