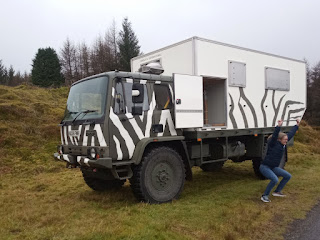 Blogging at 20:00 on Friday 23rd December from intended overnighting spot N 54.40350°, W 07.56475° / http://maps.google.com/maps?q=loc:54.40350%2C-07.56475
We continued to make the most of the still-quite-foreboding-even-in-daylight OM Dark Sky Park this morning: Emma did some odd things with the truck's strong bar (pic) and then ran, whilst I had another trudge around with the bins.
I say daylight, but really mean half-light. It's been a very dull and rainy day all told and we've mostly spent it slowly but strategically splooshing through muddy verges on more of NI's splendidly rural and little-trafficked (if sometimes disturbingly narrow) roads.
The strategic part of the splooshing has been almost exclusively down to Emma-the-parkrun-obsessive. As per a previous post, we didn't go to France largely because of their parkrun debacle but are in Ireland because (entirely reasonably) the officialdom here dictates that if you keel over whilst wilfully taking part in a free community event, then that's not really the organiser's fault: it's just how stuff rolls.
We drove where we drove today and we're at where we're at tonight because it gives us easy access to the Enniskillen parkrun tomorrow morning.
It was quite tough to find a suitably remote overnighting spot in this bit of NI and we find ourselves in a more rural environment than we'd ordinarily be happy with. We don't usually stay in or near settlements, not least because we don't like causing residents concern: we needn't have worried.
Within a short time of arriving we'd met most of the loose community hereabouts and had been deftly manoeuvred into giving up most of our life story. It just is the way of things, here.
On another note, some time ago I mentioned a daylight-related cunning plan. Well, the plan is actually not so much cunning as devilishly simple. It's entirely true that we were disappointed that by not visiting France we would lose the welcoming extra hour of evening daylight that CET affords. It really does raise spirits at this darkest time of the year
So, never mind CET or GMT, we're now on EST (Emma and Steve Time). In the morning we work to Emma's mobile that is set to GMT. This gives us decently light mornings. Come midday we swap to the time on my mobile, which is set to CET.
As a result, on EST in Ireland right now it's currently getting light at about 8.15am, and not getting dark until about 6.00pm.
It's best not to worry too much about how it works, but instead just to enjoy the fact it seems to.
Sent from my mobile device
Posted on: Saturday, December 24, 2022