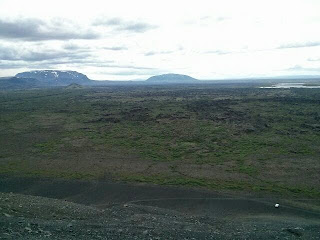 It's been yet another full-on day based mainly around the Myvatn area.

This morning Emma treated herself and went to the Myvatn Nature Baths, which are much like Iceland's celebrated Blue Lagoon only much more cosy and far less touristed (it's still a good idea to get there early though). The baths have a number of pools of differing temperatures and with slightly different compositions of minerals and substrate. They are entirely natural pools but highly sanitised with proper changing facilities, walk-ways, and comfortable places to sit submerged and relaxed. It's largely a lady thing and Emma reported thoroughly enjoyed the deep cleaning and pampering.

I went to the lake instead and got sweaty. It was a half training / half birdwatching foray that worked quite well on both counts. The notable species I saw were: scaup, Slavonian grebe, Whooper swan and an Icelandic specialism, Barrow's golden eye.

After lunch I got even more sweaty and Emma undid all her lady-pampering when we climbed the slag heap, Hverfell, mentioned in yesterday's blog.

Once on top its obvious popularity as a tourist attraction becomes clear. It's actually a massive volcano ash cone with magnificent views for dozens of miles in all directions (see pic with truck for perspective). Even Emma had to admit it was even better than Askern pit stacks. Icing on the cake when descending was another, better-than-yesterday gyr falcon sighting. One quartered its hunting grounds in full view for a good few seconds while we watched on in deference. These things can and do chase down and take geese.

A couple of other attractions were knocked off around the lake before we finally quit the area and headed off for Goðafoss waterfall. Described in our guidebook as a perfectly proportioned horseshoe-shaped affair, we were happy to accept the claims at face value and left the theodolite in the truck. It was indeed mightily impressive.

It was actually quite nice to clear Myvatn, it's a must-do area and simply can't be missed but there's no escaping that it's a full-on honey-pot and you are well and truly a tourist. Anyone visiting would do well to start at the tourist information office in Reykjahlið.

A fuel-up and levels and pressures check at the Goðafoss waterfall has now set us up for a go at the Sprengisandur route, the longest F road crossing of Iceland's barren interior.

If we never post again, the optimum tyre pressure for a 7.5 tonne LD 244 over washboard is probably 55psi front / 60psi rear.