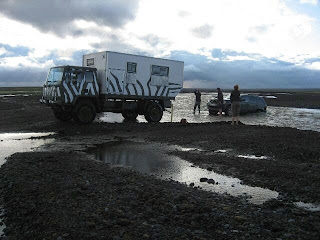 We took to the Sprengisandur route via the Bàrðardalur valley. A big pro for coming this way is the Aldeyjarfoss waterfall, probably the best looking waterfall yet encountered. The setting helps, the river has carved its way through basalt rocks leaving hexagonal columns like those found on the Giant's Causeway. Even better is that the river has then undercut them in places leaving some truly odd looking formations.

Since that point bird life - in fact all life - has been pretty sparse. We've been at or about 1000m altitude most of the afternoon and only the occasional clump of sea campion, wild thyme, and brilliantly green sphagnum around the occasional flush have broken up the lifeless desolation.

Along this route so far we've seen a few more push-bike tourists. It can't be stressed enough how hard what they are up against is; the road surface, inclines, the cold, the ever-changing weather; again, massive respect is due; those people are undoubtedly learning about themselves.

We stopped for the evening just short of a very fast flowing and rocky ford right under the Tungnafellsjökull glacier (as per coordinates) where the utterly stunning scenery basically screamed at us to stop driving and just be amongst it for a while. We both managed a run here and were just about to settle down for the evening when something of a drama unfolded before our eyes.

An Icelandic couple in a hired Jeep Grand Cherokee 4x4 tried to rush the crossing and, I suspect, drew water into the transmission causing a hydraulic lock. The car was literally marooned with the back end sunk deep into the freezing glacial river.

Luckily a Belgian chap arrived in a Land Rover and started the process of helping out. He had some waders and plenty of recovery strops, unfortunately his Landy didn't have the beans to recover the stricken vehicle, so we helped out.

Using the Belgian's gear the truck easily dragged the stuck 4x4 out to safety. The Belgian and I then had a cursory go at getting the car going but to no avail.

And so, as the only vehicle with full life support facilities easily to hand, we've been landed with making hot chocolate and generally being around until the hire company manage to get a recovery vehicle out to sort out the mess. It may take a while, we're somewhere in the region of 80 miles of cart track from the nearest farmstead, probably many more from the nearest tow truck.

The poor bloke had to wade about in the river and was outside for a good hour or so and must have been frozen. At least post-chocolate drink he and his female partner looked a little warmer, if no less fed up.