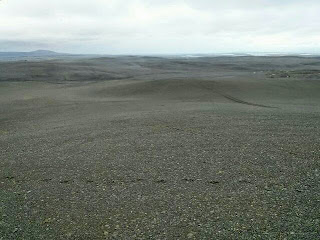 The Icelanders from last night were rescued to a mountain hut style campsite at about 11pm and a tow truck turned up at 4.50am to recover the Jeep.

After breakfast we set about completing the desolate (pic) Sprengisandur crossing. The 'road' throughout is very rough but doesn't have as many fords (or technically challenging sections) as those of the Askja area. The most difficult-to-deal-with component is the interminable washboard. For our truck the optimum speeds to hit this kind of surface are either about 16 or 32mph. The latter is actually smoother but woe betide if any slowing from that 'skipping-across-the-top' speed is required (and it often is as holes, boulders, hills and bends are frequent), as all speeds between mid-teens and early 30s are bone-shatteringly destructive.

Truth be told the truck has now had a right battering with hideous surfaces and loads of torsional stress to cope with. Happily, so far, all is holding up very well indeed. We've lost one plastic nut that held a cable conduit clip in place and a spring-steel calorifier mounting strap has broken. Considering the attrition we have so far witnesses on F roads (a good deal), if we can continue to get away with such minor issues, I'll be well pleased.

By late afternoon we were out of the 'interior' highlands and are now only a few kilometres short of out next destination, Landmannalaugar, an area known for its outstanding natural beauty, coloured mountains and hot springs. We're currently stopped for the night at the coordinates shown overlooking a tumbling river and a sample of this landscape. Fair to say it's pretty awesome. We've both managed an MTB session here and are about to settle down for tea.

From the cab, whilst typing, I've just spotted a pair of harlequin ducks on a fly-by. Though a good sighting, that's about all the birdlife this location has currently given up.